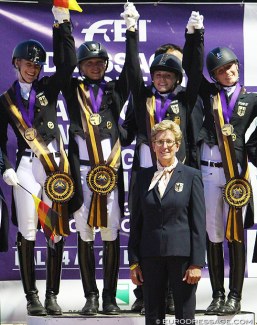 Although Dutch Jeanine Nieuwenhuis won the Intermediaire II it was Germany who persevered and won the team gold medal in the nations' competition for Under 25 riders at the 2019 European Youth Riders Championships on Thursday 25 July 2019.

Hosted at the wonderful Horses Riviera Resort in San Giovanni in Marignano, Italy, the 2019 European Youth Riders Championships have brought together Europe's best Children, juniors, young riders and Under 25 Grand Prix riders for the title fight in the respective divisions.

For the Under 25 riders, the team medals are decided by the Intermediaire II test. Thirty-four U25 combinations traveled to Italy to brave the 35° C heat and compete in the wonderful Toro outdoor stadium, of which the layout and size gives a true Championship feeling to the event. Unfortunately because some chef d'equipes from leading dressage nations complained that the wonderful jumbotron, placed far away at the edge of the arena, might be distractive to the horses, who were familiarized with the arena, the screen was switched off. This also meant that there was no display of the running clock, what caused more confusion about how much time riders have to enter the ring. It also created an ugly grey field in the otherwise gorgeous green landscaped backdrop of the stadium.

The Under 25 riders contested the Intermediaire II in two groups on Wednesday and Thursday in the afternoon when temperatures were no longer sizzling hot. The top two ranked combinations in the end presented the judges Marietta Almasy, Maria Colliander, Elke Ebert, Francis Verbeek, and Freddy Leyman the choice whether they preferred power or grace.

Power won the match as Dutch Jeanine Nieuwenhuis and her powerhouse 14-year old Dutch gelding TC Athene (by United x Jazz) topped the board with 76.324%. The tall chestnut gelding and his petite rider entered the arena in a big canter followed by a big extended trot and scopey half passes. Tim Coomans' Athene has a real engine behind and his rider is not afraid to go full throttle and ride with risk. The horse has good airtime in passage, but the piaffe is the weakpoint as Athene is just not getting the hang of this collected movement. He drops on the forehand and loses confidence in the rhythm. The piaffe at A was the better one of the two. In canter, Athene convinced big time with his uphill extended canter, very nice pirouettes in which he did show his ability to sit. The tempi changes were huge. The last extended trot had massive ground cover but was too hasty. The final passage on the centerline was very regular.

German Jil-Marielle Becks and her home-bred 12-year old Westfalian mare Damon's Delorange (by Damon Hill x Rubin Royal) were the total opposite. They presented a very soft image with a soft contact and featherlight movements. The halt was narrow in front, but the extended trots were ground covering. The half passes were nice but Delorange regularly dropped behind the vertical. The extended walk had a clear 4-beat rhythm but in the collected so became very slow. The passage is bouncey but the mare can not yet carry herself well and got behind the vertical with the hindlegs not truly under the body. The first piaffe was timid, the second had more sit but travelled a bit forward (which is allowed 1 meter at Under 25 level). The two tempi changes were lovely. They finished second on 76.177% Interesting to note is that Becks did not bring her number one Grand Prix horse Damon's Satelite to Italy, but opted for the less experienced Delorange, who has only competed at two CDI's with Becks so far in their career.

Becks' 76.177% contributed the largest chunk for a team average of 73.922% that secured the country the team gold medal. Their second best rider was Bianca Nowag on Michele Widner del Pino's 10-year old Hanoverian Sir Hohenstein (by Sir Donnerhall x Hohenstein). They landed third place with 73.912% and had the judges divided between 72.206% and 76.029%. The pair was the first to go on Thursday and presented a very quiet, consistent image with a nice contact in the bridle. The bay gelding was very well presented. Sir Hohenstein piaffed with the hindlegs out though and also struggled to achieve proper reach under the body in passage, even though he was very regular. The extended walk was good but the collected mediocre in rhythm. The horse showed very good collection for the pirouettes.

Germany's third score came from Raphael Netz on the Werndl family's 11-year old Hanoverian Lacoste (by Locksley II x Wolkenstein II). The pair was the overnight leader on Wednesday with a 71.676%. The chestnut showed cadenced extended trots and in passage he achieved much suspension but was not always regular. Lacoste became tense and short in the collected walk and also lost a bit of the clear 3-beat rhythm in the extended canter. The contact with the bridle was very consistent though and the tempi changes were very nice and straight. The left pirouette lacked sit and was more a small volte, the right one was more collected but a bit laboured. They scored 71.676% which landed them a fifth place.

Germany's scratch score was 70.500% produced by Ann-Kathrin Lindner on Sunfire (by San Amour x Freudenfeuer). The horse passed the re-inspection by the skin of his teeth on Wednesday morning and was allowed to start as first to go in the Intermediaire II.

Nieuwenhuis' big score of 76.324% brought Holland's team average up to 73.461% for silver. The second best Dutch rider was Denise Nekeman on the 13-year old Dutch pocket rocket Boston (by Johnson x Quattro). The duo has been competing in the senior Grand Prix division since October 2018 but was asked to drop back down to Under 25 level for these European Championships as the rider is still 25 years old in 2019. Boston has a wonderful side silhouette and is expressive with his lovely knee action and engaged hindleg, but he is unsteady in the bridle and often has his mouth open. The passage was sweet, the piaffe quite timid but on the spot. The uphill extended canter and good canter half passes were a highlight. There was a mistake in the two tempi changes, but the ones were super straight. They finished fourth with 73.882%.

Holland's third score came from Carlijn Huberts on the 16-year old Dutch bred Watoeshi (by Rousseau). The black produced nice trot half passes, nice pirouettes and straight two tempi changes, but he was hard in the contact and often not entirely through the poll. The piaffe did not show enough lowering of the haunches but Watoeshi sustained a good rhythm. They posted 70.176% for eighth place.

One of the top contenders for a medal this year, Dutch duo Jasmien de Koeyer and her 10-year old Dutch mare Esperanza (by Desperados x Krack C) were well on their way to score a high mark after riding very good trot extensions, sweeping half passes and an excellent extended walk. In passage the mare does not move the hindlegs towards the point of gravity and stays straight in the hind legs in piaffe, but the first pirouette was small. De Koeyer got distracted, went off course and the bell rang. She then went off course a second time, which automatically leads to elimination.

The Danish team scored the bronze medal with a team average of 68.490%. Denmark's top scoring rider was Josefine Hoffmann on Anna Kasprzak's 15-year old Danish warmblood gelding Honnerups Driver (by Romanov x Don Schufro). The highly sensitive liver chestnut gelding, who is a former World Young Horse Champion, is a massive mover and he really seems to have found confidence in his rider. Hoffmann rode the trot work in an easy, quiet way with elegant half passes. The passage was neat but not really engaged from behind. In the first piaffe, the liver chestnut really tried to achieve some lift in the withers, but in the second he dropped on the forehand but sustained a better rhythm. The extended canter right had a bit of a wild onset, but the left pirouette was really beautiful. The two tempi changes were super uphill, but the transition down from canter to trot was difficult. They finished sixth on 70.882%.

Denmark's team bronze was further achieved with the help of Soren Wind (67.323%) and Emma Skov (67.265%) while Nana Gajhede's 67.206% became the scratch result. Wind saddled Barbara Welding's 11-year old Dutch warmblood Diego (by Valeron x May Sherif). The bay really pulls the hindlegs under the body in passage and the piaffe is also nice, but there sometimes was a bit of back-stepping even though the rhythm was good. The horse was not really through the poll and accepting the bit. He regularly broke out of the contact by throwing his head up and out, which meddled with the coveted image of harmony and lightness. They landed 16th place, with Skov and Cracker Jack right behind them.