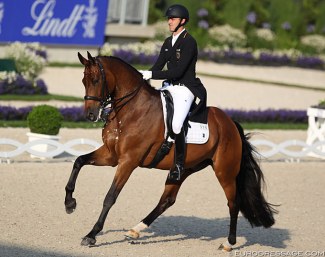 American dressage website Dressage-news.com reported yesterday that the Rothenberger family has filed a lawsuit claiming 8 million euro in damages for a vet treatment on Cosmo in January 2018 that went wrong.

The suit was filed by Sönke's mother Gonnelien Rothenberger-Gordijn with the Frankfurt District Court in October 2018 against Equine Clinic Karthaus in Dülmen, Germany, where Dr. Ingrid Hornig is head of sport medicine.

Dressage-News.com claimed that the Rothenbergers allege veterinary malpractice, when Cosmo was administered Tildren in combination with other medication in January 2018 and responded badly leading to acute renal problems.  As a result, compensation is now sought for all past and future damage allegedly caused by the treatment.

German squad riders have to keep a logbook of all veterinary treatments of their horses, which the German Olympic Equestrian Committee (DOKR, part of the German FN) gets access to. Dressage-News stated that "the records in possession of the German federation show at least 80 treatments" to Cosmo over the past three years.

The Rothenbergers and Ralph Uwe Westhoff, joint owners of Cosmo, are claiming €8 million as compensation. This amount was decided by the court for the value of the horse and not set by the plaintiff.

A hearing on the lawsuit has been tentatively set for September.

Sönke Rothenberger and Cosmo are up for team selection for the 2019 European Dressage Championships. The pair dominated the 2019 CDI Hagen with 80% scores in April, but withdrew from the first team selection trial at the German Championships in May because of a colic scare. The DOKR told them to prove form in the 4* tour at the CDIO Aachen in July, which the pair did with two victories and 80%+ scores.

Sönke disclosed the existing tension between his family and the German federation, which has questioned the transparency of Cosmo's vet records since the lawsuit, at the CDIO Aachen press conference. There he said, "all those who had doubts about Cosmo will no longer have so," referring to his two 80% marks.

In an interview with Dressage-News Dennis Peiler (top sport chief of the German federation) stated that "it is true that there were questions regarding the transparency. Therefore, the executive committee of DOKR dealt with this matter. The DOKR has thoroughly examined extensive documents submitted to it, interviewed riders and horse owners and obtained the expertise of the team veterinarian. The Executive Committee has no objections to a possible nomination of the couple on this basis."

The Rothenberger family has successfully worked together with equine clinic Karthaus and Dr. Hornig for years. Hornig was in charge of Cosmo's pre-purchase exam and has been Cosmo's treating vet until the incident in January 2018. She also approved and re-confirmed the horse's health each year for its life insurance over the past six years.

Rothenberger denies that 80 treatments took place: "that's totally not true. There weren't 80 treatments. Those are false statements. Not even 10% of that is recorded in his log, underwritten and stamped by the vet."

The Rothenbergers have always strategically competed Cosmo on a very light schedule to preserve the horse's health for a long career.  "Cosmo is the only German horse which has competed at four championships in the last five years," Sönke told Eurodressage.

The imbroglio between Karthaus and Rothenberger arose because of the malpractice in January 2018, but it has also come to light that several certificates for treatment were wrongly signed and stamped by the vet. Since the lawsuit was filed, the Rothenbergers believe the clinic is deliberately discrediting Cosmo's health and fitness with the German federation.  German equestrian magazine St. Georg contacted Karthaus for a reaction, but they declined to comment.

Sönke is upset about the negligence of the vet which brought Cosmo in a life-threatening situation. "I felt that the vet left us alone at the time and we couldn’t reach her after," he explained. "Thank god everything is fine since spring 2018. After all that happened we had great results and became German Champion, had a personal best in the Special at the CDI Donaueschingen and a personal best in Grand Prix in Tryon. I am happy that the German federation supports me the way they did and that they don’t give ear to rumors produced by the vet."

Sönke added that Cosmo has been doping test at competitions and at home no less than 16 times by NADA (National Anti-Doping Agency) in the past and has always been negative.

"After everything that happened this year, I only want to concentrate on my horse and on the sport," Sönke added. "I am severely disappointed by people who don’t accept the truth and try everything to harm us."