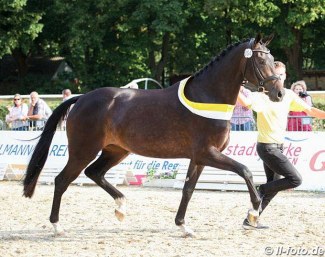 Flora became the champion dressage mare at the 2019 Hanoverian Elite Mare Show, also known as the Herwart von der Decken Show, in Verden, Germany, where a splendid vintage 2016 was presented.

The circle was closed as both champion mares were discovered by their owners at the Verden Foal Auction three years ago. Hann.Pr.A. Starena won the oak wreath of the best show jumping mare, while the Hann.Pr.A. Flora was celebrated as the best dressage mare.  For the first time the Friedrich Jahncke Prize was awarded. This price went to the mare family of St.Pr.St. Beautiful Lady II.

Among the applause of the numerous spectators, the champion dressage mare was chosen. Hann.Pr.A. Flora (by Fürst Belissaro  x Don Crusador - breeder: Janina Tamke, exhibitor: Heinz-Walter Pferdmenges), who belonged to the lot of the foals of the elite auction in autumn 2016, moved with unbelievable elasticity and did not only win over the judges due to her wonderful type.

"Everything is just right with her," enthused Germany’s top dressage rider Matthias Alexander Rath, who completed the commission. "We have seen an excellent final round of the class winners".

The 48 dressage mares from dam lines, whose successes in sport fill volumes, were judged in five classes.

The Friedrich Jahncke Prize was awarded for the first time. With this award, named after the honorary chairman of the Hannoveraner Verband, the best mare family of the past show season was honoured. The highest rating of over 40 families presented in the entire breeding area was given to the family of Hann.Pr.St. Beautiful Lady II (by Benetton Dream x Royal Highness) with her two daughters Hann.Pr.A. Diamond Lady I and II by Dimaggio. The top-class family was shown by their breeder Axel Windeler from Verden-Walle.