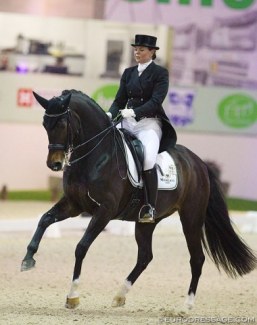 In The Netherlands, Tosca Visser-van der Meulen lost her internationally competed Grand Prix mare Asther de Jeu. The 14-year old mare was by Contango out of O.Esther (by Jazz). Visser purchased the horse as a 3-year old from the breeder.

Asther de Jeu was trained to FEI level by Edward Gal, who achieved stellar scores on her in 2013 at international small tour level. She was expected to become his successor for Totilas, but owner Tosca decided to ride her herself and took her to the U.K. where they lived at the time. In 2015, Tosca and Asther made their CDI small tour debut in Hickstead and in 2017 they began competing at international Grand Prix level.

Tosca and Asther's best results were achieved in 2018. They won the Kur at the CDI Deauville and swept the big tour at the CDI Waregem. In May the mare injured herself and she had just recovered from her injury. During a routine MRI, Asther developed complications during the anaesthesia from which she passed away.

W.Esther was by Rousseau out of O.Esther.  In 2013 De Jeu sold a half share in W.Esther to the Welsh's Ellenbrae park in Australia and the mare became the young rider's horse of Charlie Welsh.

She was first briefly competed by Maree Tomkinson but later on Charlie showed her at international Young Riders' level in Australia in 2017 and 2018. The horse's last show a year and a half ago in January 2018 at the CDI Boneo.

W.Esther passed away due to colic.