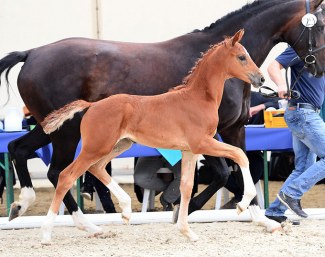 The 2019 PS Online Foal Auction is quickly coming to a close on 18 August 2019. Don't miss out on a great opportunity to secure a top quality dressage foal that was hand-picked by Paul Schockemöhle and Andreas Helgstrand.

For the seventh time Paul Schockemohle assembled collection of foals and in 2019 in partnership with Helgstrand Dressage. Eighteen jumper and dressage bred foals are offered for sale online, all with top pedigrees.  Sires for the dressage lot include World Champion Totilas, the Nurnberger Burgpokal winner Vitalis, German Champion So Unique and the twofold stallion performance test high-flyer Sezuan's Donnerhall, amongst others.

The auction ends on 18 August 2019, so keep a close eye on the bidding process at https://ps-online.auction/en/

The sire Vitalis was Reserve Champion of the NRW licensing in 2009, Champion in the USA in 2013 and victorious in the International Small Tour at seven years old in 2014. In 2016, he came back to Germany and, ridden by Isabel Freese, he won the Burg Cup Final in Frankfurt.

The dam Sunshine is the full sister of the licensed stallion Sean Connery, who successfully competed in Grand-Prix with Therese Nilshagen/SWE. The second full brother also named Sean Connery was placed at the World Championships for Young Dressage Horses and is victorious with Sascha Schulz/LUX in advanced (S) level dressage. The half-sister Scarlett O (by Stedinger) produced the advanced (S) level dressage horse Donner O (by Don Schufro).

The grand-dam Rudelia is the full sister of Pit Burger, who is victorious at intermediate (M) level show-jumping.

In 2015, the sire Feinrich was the glowing winner of his licensing and completed his stallion performance test with flying colours. In 2018, he won young horse dressage competitions of his age group and qualified for the German championships with Isabel Freese.

The dam Verb.Pr.St. Kallista is the full sister of Benjamin Werndl’s Sagami, Burg Cup finalist in 2018 and victorious in 3* competitions.

Explore the complete collection at https://ps-online.auction/en/