Elastico, Second Iron in the Fire for Akane Kuroki 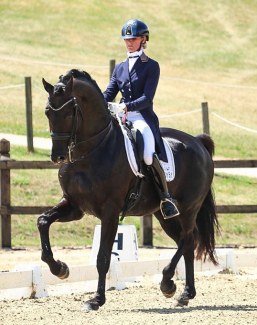 Japanese Olympic team rider Akane Kuroki has secured a second iron in the fire for her campaign for Japanese team selection for the 2020 Olympic Games in Tokyo on home turf. Kuroki acquired a co-ownership share in the 10-year old Dutch warmblood stallion Elastico.

Elastico is a KWPN stallion by Johnson out of Pubertha (by Concorde x Michelangelo). He is bred and owned by Johan Frencken and Sophie Textor.

The black is an AES licensed stallion who has been trained from novice to Grand Prix level by Saskia van Es.

Van Es and Elastico moved up the levels together and in September 2018 they made their national Intermediaire II debut. In April 2019 they rode their first Grand Prix test together in Liempde, The Netherlands, and scored 69.239%

Elastico arrived in Aubenhausen, Germany, on Saturday 14 September, where Akane is based. Kuroki recently switched trainers, from Bartels Academy in The Netherlands, to Benjamin Werndl in Germany. She took her other Grand Prix horse, the leased KWPN stallion Bordeaux (by United) with her.

"I am really happy to ride this black stallion," Kuroki commented. "I would like to thank Sophie Textor and Johan Frencken for their trust and giving me this opportunity to ride such a talented horse."