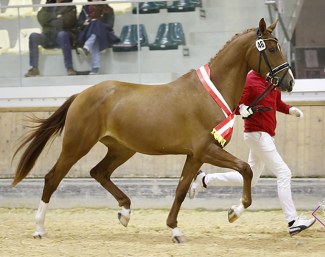 Six dressage bred 3-year old mares were invited to compete in the Champion's ring. Broadmoars Leonora, who is by KWPN stallion Eye Catcher and bred and owned by Broadmoar, scored 9.0 in both rounds and claimed the title.

"This mare is a true eye catcher. She was able to impress from the first moment. She is nicely built uphill ticking all riding horse boxes that we wish to see," said judge Hans Heinrich Brüning.

The reserve champion was Fenomenal (by Van Vivaldi), who is bred by Franz Hummer-Niedermayr. She scored 9.5 for type and was praised by the judges for her substantial body that was elegant and long-lined. This mare went on to win the 2019 Austrian Warmblood 3-year old riding horse championship on Sunday.

In the 4-year old dressage mare division, six mares qualified for the champion's ring. The winner was Florina MBH (by Antango), bred and owned by Moosbachhof. She scored a total of 8.60 points.

"A big, strong and substantially built mare," said judge Florian Solle. "Her hindquarters are well built, which shows in her movements. On all levels and appealing mare."

The 4-year old reserve champion is Cascara L (by Ramiro's Bube), bred by Liebscher. She scored 9 for type and movement. She totaled 8.40 points for second place.