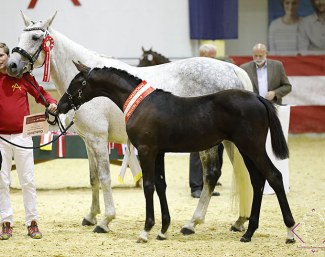 Nine fillies out of a group of 30 were selected for the championship ring by judges Florian Solle and Hans Heinrich Brüning. The winner was Nassera MB (by Zenon VDL), bred by Barbara and Michael Hager. She scored the highest day total of 9.17 points. The runner up in the filly division was Moarhof's San Franziska (by Bon Coeur). She scored a total of 9.0. She is bred by Nadja Pollhammer.

"Wonderful in expression, in type she couldn't be prettier and extremely ground covering in her movements, always in balance," said the judges about champion Nassera MB. Referring to San Franziska, the judges commented that "she is truly one of the strongest foals of the days, very strong in her type and movement mechanics."

In the colt division six out of the 20 participating colts moved to the Champion's ring. Bred by Johannes Schwaiger, Sensation (by Secret) was named the champion with 9.0. Camino Royal (by Cadeau Noir) was named reserve champion. This colt is by Sport Horse Breeding Leser and scored 8.83 points.

"Also in the background he stood like a statue. He is a large framed foal with great ground cover but always loose and swinging," said judge Brüning about the colt champion. "(Camino Royal) appealed to us in all fields. He's built uphill, with a correct conformation and with a sensational movement mechanism in trot."

Six pony foals made it to Stadl Paura and 3 were selected for the champion's ring. Bergerhof's Dreitakt (by Dreiklang AT) was named the winner. Bred by Doppler-Frank, the colt was praised for his type, expression and gaits. The runner up was filly Nairobi PZM (by FS Numero Uno), bred by Margret Mondschein.