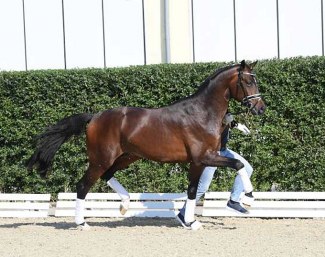 Paul Schockemöhle selected a lot of 10 dressage bred and 9 show jumping bred stallions and sold them online as stallion prospects.

The price highlight of the auction was a show jumper, Viblue PS (by Vivant van de Heffinck x Chacco Blue) which sold to the U.S.A for 95,000 euro.

The bay Furst Donnerhall could have been better named For Romance III as he is the full brother to licensed stallions For Romance I and II and the PSI auction price highlight and Bundeschampion Fasine OLD.