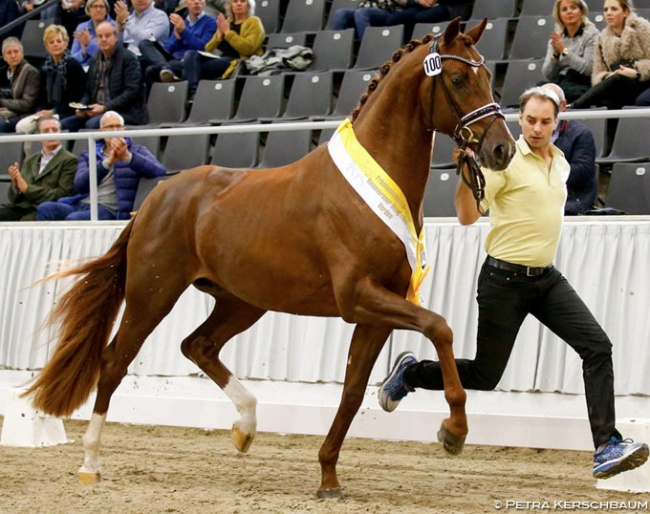 Von und Zu (by Vitalis x Floriscount) became the crowd favourite of the 2019 Hanoverian Stallion Licensing in Verden, Germany, on 24 - 26 October 2019, but it was the premium licensed Confess Color that caused a sensation by selling for the second highest record price of 1,890,000 euro.

And no, the horse did not sell to Andreas Helgstrand!

The business woman-with-balls beat Helgstrand and Paul Schockemöhle in a very confusing bidding duel between herself and Paul Schockemöhle live in Verden and Helgstrand on the phone. The auctioneer knocked down the hammer at 1.79 M, although Schockemöhle had the 1.8M bid, which led to confusion. Then the bidding was re-opened and Gutmann went higher to 1.89M and had the final bid again. According to Dutch equestrian site Horses.nl, the "Shockstrand" delegation that was present in Verden left the auction hall demonstratively after losing the bidding duel and there were no more phone bids from Vodskov (DEN).

Helgstrand set the auction record at 2,010,000 euro when he bought Vivino at the 2018 Hanoverian licensing last year. The previous licensing auction record was 1.2 million euro which Helgstrand paid for Revolution three years ago. The most expensive horse ever sold at a warmblood auction, whoever,  is still set by SPH Dante, which sold to Russia at the 2014 PSI Auction for 2.8 million euro.

The Hanoverian society does not proclaim a champion stallion, but the favourite of the crowds was Von und Zo (by Vitalis x Floriscount), bred by Christa and Ludwig Welling. The short-backed liver chestnut was praised for his spectacular gaits. He is co-owned by  Thomas Berger and Celle state stud.

The premium stallions are:

The KWPN stallion Vitalis had 6 sons selected for the licensing and five were licensed, although the 6th one was good enough as well but had a problem with the testicles. This colt was also the youngest of the lot, just 27 months old as he was born on 13 July 2017 !! In the future German law will prohibit the training and preparation of young animals before they are 30 months old. The 2017 colts are Vitalis' first crop since he sold to Lone Boehg Henriksen and Paul Schockemohle and relocated from the U.S.A. to Germany.

At the auction following the licensing the strong moving Cadeau Noir x Licosto x Damsey sold for the auction record price of 1,890,000 euro to Gestut Bonhomme. The Hanoverian board of directors had an annus horribilis with the turmoil following the firing of ceo Werner Schade, but the chair of the board, hans-Henning von der Decken grinned from ear to ear at the licensing as he was the owner of the Cadeau Noir.

The second most expensive horse was Victorio (by Vitalis out of the Hanoverian Mare Champion  Black Baccara (by Bon Bravour)), which fetched 720,000 euro for his breeder/owner. He sold to Austrian Gaston Glock as a future ride for Edward Gal or Hans Peter Minderhoud.