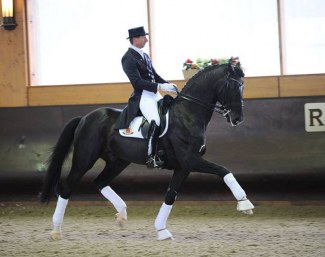 The 10-year old Danish warmblood stallion Sezuan has been proclaimed Elite Stallion by the Danish Warmblood Society based on his own and his offspring's achievements.

Under Andreas Sezuan won the Danish Young Horse Championships for 4-year olds after which he sold to German Arlette Jasper-Kohl. The stallion moved in training with Dorothee Schneider and became the triple Young Horse World Champion.

Since Schneider decided to end her collaboration with Jasper-Kohl, Sezuan disappeared from the show scene, his last start being the CDI Darmstadt in September 2017; The horse made one public appearance under Patrik Kittel in a show at the 2018 Danish warmblood licensing. In 2018 he only briefly stood at stud, in 2019 no fresh semen was available at all.

Despite some bumps in the road in Sezuan's breeding and sport career, the sire has clearly made his mark as a breeding stallion. He has sired no less than 19 medal winning Danish mares (3 gold, 6 silver, 10 bronze) and sired licensed sons So Unique, Janeiro Platinum, Suarez and Torveslettens Sylvester. He also produced the WCYH bronze medal winning mare Queenparks Wendy.