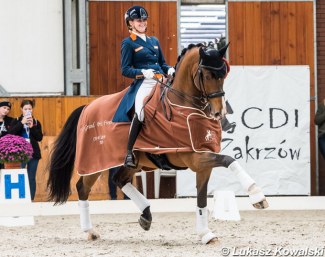 Meulendijks and Avanti (by United x Farrington) dominated a field of 11 riders in the Grand Prix on a winning score of 72.652%. The pair then moved on to claim victory in the Kur to Music with a personal best score of 79.480%. Meulendijks is trained by Dutch Jeanine Fiechter.

"I was very content with Avanti at the start of the indoor season," Meulendijks told Eurodressage. "We still had a few small mistakes because we changed some things in the training, but I believe this can be a nice season for us. I also have another Grand Prix horse, Edison, since this year, so I'd like to go for Las Vegas but with Avanti the real goal is Tokyo."

Meulendijks twice edged out Austrian Christian Schumach on his new Grand Prix ride, Donna Karacho, Ruth Kerky's 12-year old Westfalian mare by Don Schufro x Fidermark. Schumach missed out on Austrian team selection with Sinclair Jason for the European Championships this year. However, since September he has been campaigning this second iron in the fire, making his international debut at the 2019 CDI Fot in September. The pair went leaps forward on the score board in Zakrzow and finished second twice: 71.130% in the Grand Prix and 76.385% in the Kur.

"In May we did our first national Grand Prix together and in the summer we won three national GPs in a row," Schumach told Eurodressage. "Our first CDI was Fot. There we were quite happy with the Grand Prix, but in the freestyle she became a little hot and we got some mistakes. With our performance in Poland I was quite amazed. She did a really nice Grand Prix, but in the freestyle she gave me a even better and great feeling. She was much more confident than in Fot and did a faultfree test!"

Donna Karacho is bred by Sandra Neff and was previously competed by Julia Coppard. She arrived in Schumach's barn in December 2018.

"She is a real fighter and gives everything for the rider," said Christian. "She has a great ability for all collected movements: piaffe, passage and pirouettes are her strengths, beside her great basic gaits. I'm just happy with her and her development and I'm sure that we will have enough room to become even better,  so we are looking forward to our next shows Munich and Salzburg."