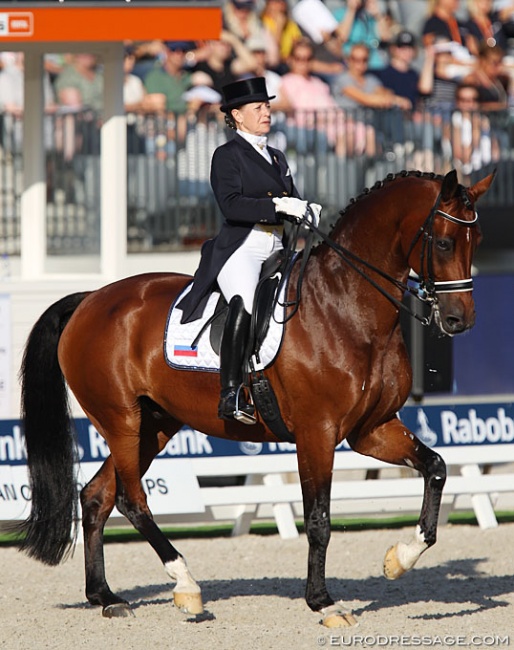 Danish Anna Kasprzak has shown that she wants to stay in the race of a Danish team spot for the 2020 Tokyo Olympics as her mother Hanni Toosbuy Kasprzak has purchased Elena Sidneva's Fuhur.

Fuhur was the revelation of the 2019 European Dressage Championships in Rotterdam, where the bay showed the most classically correct piaffe-passage in the right frame (poll highest point, nose out, lightness and harmony).

Fuhur is a 10-year old Russian warmblood by Furstenreich out of Vanessa (by Nagnat). He is bred at Olymp Kubani, a Russian Warmblood-Trakehner stud farm in the Krasnodar region in Russia

The bay gelding made his show debut under the Austrian based Russian Elena Sidneva in April 2017 at small tour level at the CDI Wiener Neustadt. One year later they moved to Grand prix level and competed for Russia at the 2018 World Equestrian Games in Tryon, where they scored 64.953% in the Grand Prix.

Kasprzak announced the acquisition of Fuhur on her Instagram account: "New talent in the stable. I'm really excited for the future with him."

To Eurodressage, Anna explained that her coach Andreas Helgstrand arranged the contact as he had been offered the horse for sale. Kasprzak added, "but we went to their barn in Austria to see him. He seems like a real gentleman and he has a huge talent for piaffe-passage and pirouettes. And he is just so easy going that you can ride everything really nicely and softly."

Since the retirement of her double Olympic mount Donnperignon at the end of 2017, Anna has not been able to maintain her spot on the Danish team. Her ride Rock Star could not seamlessly take over from "Pepe" and has recently struggled with injury. Kasprzak sold her rising Grand Prix horse Quarton to the U.S.A, as well as potential Grand Prix horses Patrik and Romanova.  Her competition career was also briefly interrupted by her pregnancy and birth of her first child in 2017-2018.

"Happy with this young man," said Anna. "We still have a lot to improve and he has to become more confident in the arena but I feel he has a huge talent and for sure he has the willingness to do his best. I’m already looking forward to compete him again."

New talent in the stable 😍 His name is Fuhur and is a 10 year old gelding by Fürstenreich. I’m really excited for the future with him! 🦄