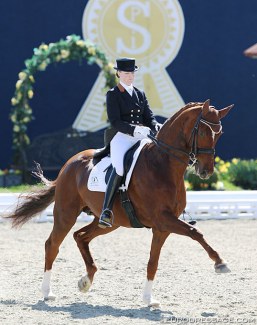 The 2007 Oldenburg Elite Mare Champion Rebelle has passed away at age 15 at the beginning of November. The mare did not survive a severe colic attack.

Rebelle was bred and owned by Blue Hors stud in Denmark. She was by Don Schufro out of Renomeé (by Regazzoni - Donnerhall x Pik König).

As a 3-year old the chestnut mare became the 2007 Oldenburg Elite Mare Champion in Rastede and was competed at the 2007 Bundeschampionate in Germany by Anja Engelbart. They finished 9th in the 3-year old mares and geldings class.

Rebelle moved back to Denmark and got trained and competed by Danish Maria Anita Andersen who worked as an assistant trainer under Esben Möller at Blue Hors at the time.

The pair won the silver medal at the 2009 Danish Young Horse Championships and went on to represent Denmark at the 2010 World Championships for young dressage horses in Verden, where they finished fourth in the 6-year old finals.

Maria took the redhead to small tour level and competed her internationally at five CDI's, the 2012 CDI Lingen and in 2013 at the CDI Hagen, Wiesbaden, Rotterdam and Lingen. Rebelle went to the 2013 Danish Dressage Championships in Broholm in June, where she got bronze in the small tour championship. Her last show in her career was the CDI Lingen in July 2013, where she was 6th in the Prix St Georges (69.00%).

Rebelle was retired early from sport and got four foals. In 2008 she produced the Oldenburg registered filly Razzin (by Zack) and in 2017 and 2018 there were two Don Olymbrio offspring. This year Rebelle has filly by Zackerey which received a premium from the Oldenburg society.

Rebelle suffered from several bouts of colic in her life and already had two operations before, the first one when she was a 7-year old and then again when she was at small tour level. A sport injury made Blue Hors decide to retire her from sport and turn her into a brood mare. At the beginning of November 2019, Rebelle colicked again and was operated on, but could not be saved.

"I was so sad when I heard the news that she died. She meant so much to me," Maria Andersen told Eurodressage. "Rebelle was an amazing horse. She was so talented for the difficult movements, so I never really had to teach her anything. She just did it. She was very hot, so you had to keep her calm and quiet and try to keep all the basic work going. She was a bit like her father, getting high in the neck and losing the back, so that was most of the training I focused on."

Maria continued: "Rebelle was always my number one horse. I loved her so much. She meant so much to me. She is probably the best horse I ever educated. She was very lovable and sweet in the stable. You could have a small kid handle her. Then when you were riding her and you were in the saddle, she was quite hot, but never stupid. She really hated the prize giving ceremony. That was not her thing. It was a pleasure to work with her."