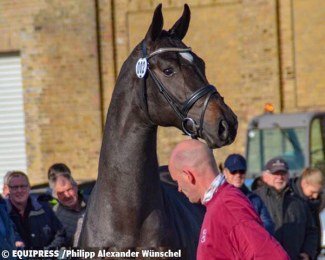 One dressage bred colt, Fidano, has been approved for breeding at the 2019 Holsteiner Stallion Licensing in Neumunster, Germany, on 31 October - 2 November 2019.

The 2019 Licensing was a huge success for breeder Manfred von Allwörden, who is based at Gestüt Gronwohldhof and presented no less than 9 out of 71 colts at the licensing. Five of those were licensed! He bred the licensing and reserve licensing champion.  While Cahil was not for sale, the reserve champion Chinchero (by Chopin x  Clarimo x Cassino) was and sold for 400,000 euro to jumping rider Janne Friederike Meyer-Zimmermann.

Although 71 colts were presented, Holstein was strict in licensing colts compared to other main studbooks that are much more lenient. Holstein accepted just 20 colts and 6 of them were named premium stallion.

One of the premium stallions was a dressage stallion: Fidano.

Bred by Sarah Pflügler and Ahrens, Fidano is by Fidertanz out of Unica x (by Silvano N x Rocadero x Calypso I). He is owned by the Holsteiner Verband Hengsthaltungs GmbH (Elmshorn). Fidano marks great breeding success for Pflüger and Ahrens as he is their first home bred colt that went on straight to becoming a premium stallion.