Tim and Cheryl Holekamp, Trakehner Breeders of the Year 2019 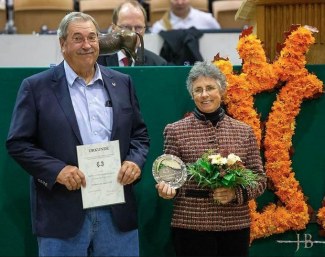 Americans Tim and Cheryl Holekamp have been named Trakehner Breeders of the Year 2019 and were honoured by the German Trakehner Society at the 2019 Trakehner stallion licensing in Neumunster on 9 November 2019.

This is the first time that this honour has been bestowed upon American Trakehner breeders.

The Holekamps were recognized for their lifetime achievement of breeding and starting the journey of the Trakehner horse Tsetserleg.

"The story really began with the infancy of the internet. Tim and Maren Engelhardt met each other through the internet and began our friendship with this unique and amazing young woman of East Prussian descent. This began the journey of Windfall coming to the USA to help win the Olympic team bronze in Athens with rider Darren Chiacchia," Cheryl Holekamp reminisced.

Tsetserleg (by Windfall out of Thabana (by Buddenbrock)) was born on at the Holekamp's New Spring Farm in Columbia, Missouri, where he spent the first five years of his life developing the basics for eventing success under Emily Coulter. Christine Turner recognized something special in this quirky young horse and purchased him. She allocated the ride to Boyd Martin, who earned an individual and team gold medal at the 2019 Pan American Games in Lima.