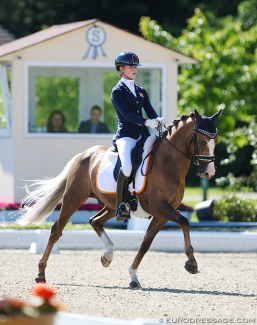 Robin Heiden's Dutch team pony Colourfull Cannonball has been sold to the Austrian dressage family Jöbstl as a future mount for the pony riding daughters Fanny and Florentina.

Colourfull (sp) Cannonball is an 8-year old Westfalian bred pony by Can Dance out of Nadona (by Nabucco R x Domingo x Shalom). He is bred by Mareike Teeken.

Robin Heiden made her CDI show debut on the gelding at the 2018 CDI Nieuw en St. Joosland and went on to show in Exloo and Aachen Indoor that year.

The pony now sold to the Jöbstls who live in Switzerland. The sale was brokered by trainer Coby van Baalen.

"Now my pony time is really over," Heiden said about the sale of her palomino. "This morning we brought Colourfull Cannonball to their new owners in Switzerland. They are super happy with him. When I got CC I couldn't dream of what we have achieved now. From our first internationals to the Europeans in Poland. They were all dreams come true. I'm super proud of CC and I know he'll do his very best with Fanny and Florentina."

Mom Andrea Jöbstl-König, who is heir to the König bakery bussiness and a lawyer by profession, is an accomplished, international Grand Prix rider herself.