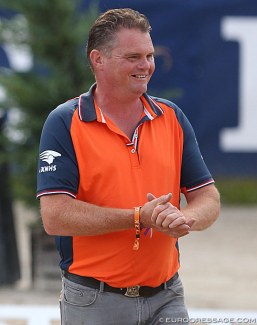 The dressage committee of the Hungarian Equestrian Federation has appointed Johan Rockx as the national Grand Prix team trainer with the 2024 Olympic Games as long-term goal.

Rockx' principal tasks include helping the Hungarian Grand Prix riders qualify for the 2021 European Dressage Championships, to be set in Budapest, Hungary and to qualify a team for the 2024 Olympic Games in Paris.

Dutch Grand Prix rider Johan Rockx is an international Grand Prix rider and former Dutch Dressage Team trainer. In 2016 he began assisting Wim Ernes  in March and by June he became the full-time team trainer leading the Dutch team to the 2016 Rio Olympic Games. His contract was only for one year.

Rockx is now coaching his daughter Thalia who has been a member of the Dutch team at the European Young Riders Championships in 2017-2018-2019 and to the 2018 World Young Horse Championships.

Johan will travel to Hungary for the first time as team trainer on 12-13 December where he will assess the current Grand Prix riders as well as the rising stars close to Grand Prix level.

"Hungary wants to try to qualify for the big Championships but there is still a lot to happen for that. In 2020 I will help the Grand Prix riders to further develop and I'll assist them to set up a planning. I think it's a fun challenge," Rockx told De Hoefslag. "I have been connected to the Hungarian Talent Plan for the youth riders for the past four years, so this winter I'll go there more often to train the younger combinations. I love doing that. Now with the Grand Prix riders added it's a nice combination. I'll see how things go next year, also in combination with the stable at home and the coaching of Thalia and then we'll plan further."