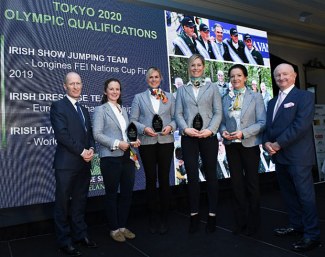 The stars of Irish Equestrian sport were honoured at the 2019 Horse Sport Ireland medal reception on 28 November 2019 following an incredible year which saw history made as three Irish teams gained Olympic qualification.

Guests were welcomed to the reception by Horse Sport Ireland Chairman Joe Reynolds, who congratulated all the athletes on their incredible results during the year. Speaking about Horse Sport Ireland’s achievement of having three teams qualified for the Tokyo Olympics, Reynolds thanked Sport Ireland for their fantastic support without which Olympic qualification would not have been possible.

Among the fantastic results during a record-breaking season, history was made at the 2019 European Dressage Championships in Rotterdam during August, when the Irish team of Judy Reynolds, Kate Dwyer, Anna Merveldt and Heike Holstein, led by chef d’Equipe Milan Djordjevic,  claimed Olympic qualification for Tokyo 2020 which will be the first time ever that Ireland will have a full Dressage team at an Olympic Games.

All four members of the history-making Irish Dressage team were in attendance at the HSI medal reception and along with all Irish medal winners from the season, were presented with special awards.

In the youth divisions as well as in the young horses classes, Horse Sport Ireland still fails to make an impact when it comes to dressage. However, Ireland's young show jumpers and eventers continue to make headlines.