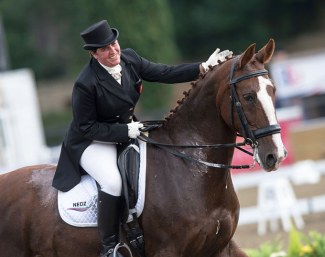 Mr President, the former top horse of Steph Croxford, has been put to sleep at the age of 25. The Croxford family said their final goodbyes on Wednesday 20 November 2019.

The driving-bred chestnut, who Steph spotted in the classified section of her local paper as four year old, won the hearts of the British public with his inspirational rise from modest beginnings to Grand Prix glory. Named Mr President after former US President Bill Clinton, the 16.1hh gelding and his environmental geologist rider formed a formidable bond early on, yet it was some time before they knew their destiny lay in dressage.

Their first year or so together was spent having great fun - riding cross country, show jumping and taking part in local one day events. It was only when a trainer on a cross country training day remarked that the horse belonged in the dressage arena that Steph changed tack – quite literally – and took up her new sport.

Mr President’s breeding, albeit unconventional, gave him a natural ability and presence between the white boards. By a Gelderlander x Hackney stallion and out of a KWPN mare, his expressive action, natural exuberance and the great understanding between him and Steph, earned him early success. They reached PSG by the age of seven and, aged nine, he embarked on his Grand Prix career, Steph training many of the movements on hacks.

It was only after their international debut at Hickstead CDI3* in 2004 that Steph sought the help of Richard Davison to develop their performance. In 2005 and 2006, they qualified for the Nationals at Inter II and Grand Prix. During 2006, they continued to improve their scores, winning several Grands Prix, Kürs and Specials at home, and were selected to represent Great Britain at Olympia’s FEI World Cup™ Qualifier.

Many will remember the reaction of the Olympia crowd as they clapped along to Steph and Mr President’s Blues Brothers freestyle routine. Ever the crowd-pleasers, as they left the arena to a standing ovation it was clear that Steph and ‘Rim Rim’, as he was affectionately known, had found a place in the hearts of the dressage community.

Steph retired Mr President after their final ride together at the 2013 National Championships at Stoneleigh.

When riding him, it was just like putting on a glove. I didn't know where I finished and he began. We were of one mind," said Steph Croxford

Steph paid tribute to Mr President on Facebook: “On 20 November 2019 we finally had to say goodbye to our beloved 'Rim Rim' (Mr President), the Main Man, No.1. His mind was still so willing, but sadly his body was not. He left us on a sunny winter’s day, with his horse pals around him, after spending a morning munching the grass on the garden lawn. Simon and I were by his side as Arnie Agnew gently sent him on his way to pastures new.

“He was responsible for sending us on this lifelong journey of over 20 years, so far. It is because of him that we moved to this small Derbyshire village and set up house here, producing a wonderful life for our children and ourselves. We owe him so much, as our decisions over the past 20 plus years have been mainly aimed around him and his life.

“It's because of him, I am where I am today. I know that horse would have died for me. If ever there was a horse that I would want to ride into battle with....it would be him. I knew he would have willingly given his life for me. When riding him, it was just like putting on a glove. I didn't know where I finished and he began. We were of one mind. Simon always joked that he was my second husband.

“Many people know our history together, but had I not seen that small advert in 'The Yorkshire Post' advertising a 16.1hh chestnut four year old gelding, things would have been so different. Because of that advert, we had 22 years of pleasure together. We travelled all over Europe competing, we were on target for the Beijing Olympics, before his injury halted play for a while. He came back fighting and enabled us to be part of several Nations Cup teams and competed in numerous World Cup qualifiers. He even gave Richard Davison a few months of entertainment, whilst I was pregnant with Annabelle.

“'Rim Rim' was and will always be No 1 in our hearts. In Arnie Agnew’s words, as he slowly drifted from this world; ‘Some horses, you could write a book about, but with him....he could write an entire trilogy'. He simply was 'a one in a billion' horse that shall never be forgotten in our hearts. We love you 'Rim Rim' and I know we will be together again, dancing around those fluffy clouds. Sleep tight our precious boy.......

“I would like to say a very special thank you to Arnie Agnew of Agnew Equine and Louise (I believe that is who the lovely lady was) at Redferns, for being so caring and understanding at this very difficult time.”