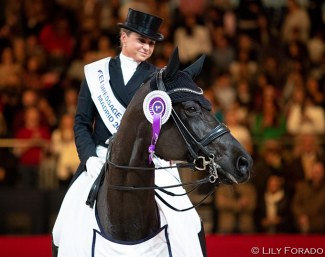 Dorothee Schneider secured the third successive German victory in this season’s FEI Dressage World Cup™ Western European League when coming out on top with DSP Sammy Davis Jr. in Madrid, Spain on Saturday 30 November 2019, where Claudio Castilla Ruiz (Alcaide) lined up second for the host nation ahead of The Netherlands’ Hans Peter Minderhoud (Zanardi) in third.

At the opening leg of the 2019/2020 qualifying series in Herning, Denmark in October it was the home side’s Cathrine Dufour who reigned supreme, but Schneider’s compatriot’s Isabell Werth and Jessica von Bredow-Werndl dominated at the next two rounds. Today Schneider made it a back-to-back German hat-trick, but it wasn’t all plain sailing for the partnership whose record includes European team gold in 2017, World Championship team gold in 2018 and a fifth-place finish at the FEI Dressage World Cup™ Final in Paris (FRA) three years ago. Because Sammy was really on his toes this evening….

“He was very good in the Grand Prix yesterday, but in the beginning of the Freestyle today he felt really fresh and we made one mistake in the extended trot and then in the two-tempis", Schneider said.

"I know him so very long now, I’ve been riding him for five years and he has a lot of his own ideas about how we should be doing things! But that’s one of the reasons I love him - he has so much character, we have a great feeling together and he just keeps getting better all the time," said Dorothee Schneider (GER).

Spain was well-represented with five starters in the 13-strong field, and it was Jose Daniel Martin Dockx and Manchego ARB who were in the lead on a score of 73.265 at the halfway stage. But fellow-countryman Juan Matute Guimon steered Don Diego out in front as the final group of competitors took their turn, only for his mark of 74.460 to be immediately overtaken by Great Britain’s Richard Davison and Bubblingh who put 74.615 on the board.

Castilla Ruiz blew the competition wide open however with a spectacular ride on his handsome 14-year-old stallion Alcaide when fifth-last to go. When Madrid joined the Western European League series for the first time last year this pair wowed the home crowd with a really enjoyable performance to take runner-up spot behind Spanish legend Beatriz Ferrer-Salat and Delgado. And they didn’t disappoint this time out either. Once again kicking off their floorplan with one-handed one-tempi changes, and consistently producing quality piaffe/passage, they completed with a confident final halt to raise the bar all the way up to 80.230.

That was always going to be challenging, and when Schneider’s average was hovering around 79 percent it wasn’t clear if her double of errors was going to leave the double-Olympian vulnerable in the final analysis. But the pure quality of Sammy’s work, including his grace and elevation in passage and his fabulous pirouettes along with strong artistic scores edged the pair up to a final tally of 82.295 which clinched it definitively.

Second-last to go, Dutch star and 2016 FEI Dressage World Cup champion, Hans Peter Minderhoud, was pleased that his 15-year-old grey stallion, Zanardi, coped with the arena atmosphere. “It wasn’t easy for him because he’s a bit spooky, but it was great to be here for the first time in Madrid and with today’s points I’m now almost qualified for Las Vegas - I’ve been there three times before and I would love to ride there again!” he said after slotting into third place on 78.350 and moving up to the top of the Western European League table. Last to go, Morgan Barbancon Mestre from France (Sir Donnerhall II) finished fourth which leaves her lying joint-fourth in the League moving on to the next leg in Salzburg, Austria next Saturday.

The top nine in the WEL rankings will qualify for the 2020 FEI Dressage World Cup™ Final and Schneider, now in joint-seventh after four of the 11 qualifying legs, has qualification clearly in her sights. But it’s not easy being German it seems, because as it stands her compatriots Jessica von Bredow-Werndl, Frederic Wandres and Benjamin Werndl are ahead of her on the league table and they all want the same thing - to be one of the two Germans who will join defending champion Isabell Werth for the season finale in the Thomas & Mack Arena in Las Vegas, USA next April.

“We have so many very good riders, and we all want to go!” said Schneider tonight.

Text by Louise Parkes for the FEI
Photos © Lily Forado