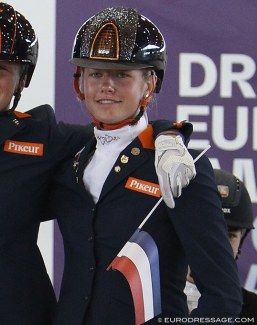 Dutch pony rider Senna Evers has fallen off a horse and fractured her shoulder on Thursday 28 November 2019.

The 14-year old was riding a 3-year old when she got launched from the saddle and landed straight on her shoulder.

"I knew straight away this was bad," Evers told Eurodressage. "I was picked up by the ambulance. I can't ride for six weeks. I'm so bummed and can't wait to train the horses again."

Senna made her international show debut in 2017 aboard the former Dutch team pony Majos Cannon (by Marchi II). In 2018 she also started to campaign a second pony, Macho at CDI's in France, Belgium and The Netherlands.

This year Evers was offered the ride on the Dutch warmblood Happy Feet, who was the double European Children's Champion, and for whom a new rider was sought. Evers focused on the Children's classes this year and competed at the CDI's in Nieuw en St. Joosland and Exloo to get selected on the Dutch team for the 2019 European Children Championships in San Giovanni in Marignano, where they won team silver and placed seventh individually. She also won bronze at the 2019 Dutch Children Championship.

Evers was back out on her pony Majos Cannon at the CDI Exloo in October.

"I'm riding my own pony, Majos Cannon, and my own 3-year old stallion Windsor. Then I ride two for VSL Horses, the 4-year old King Galaxie and another one I just got on two days ago," Evers explained.