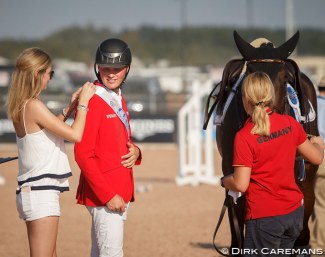 We just found out that German dressage rider Friederike Hahn got engaged to German show jumping rider Maurice Tebbel in March. The 29-year old Hahn was a member of the German team at the 2009 European Young Riders Championships in Ermelo with Richard Löwenherz. Most recently she has been competing Die Furstin at international small tour level for the past two years. She is managing director of the outdoor furniture company Gardanio.  Her fiancé is the 25-year old Tebbel has competed in nine different European Championships in Pony, Junior, Young Riders and Senior category. As a senior he represented Germany at the 2017 and 2019 European Jumping Championships in Gothenburg and Rotterdam, and 2018 World Equestrian Games in Tryon.

Japanese Olympian Akane Kuroki had a trip to the hospital for some X-rays. Her stallion Bordeaux pulled a bit too hard on the lead rope and injured petite Akane's shoulder. In the hospital she was diagnosed with a dislocated shoulder.

2019 Pan American Games Gold medal winner Sarah Lockman has also added a young star to her string. Her sponsor Gerry Ibanez purchased the 3-year old Dutch warmblood mare Lyamora (by Ferguson x Contango) right before he passed on 5 November 2019. "This beautiful mare is an “out of this world” mover with a super character both on the ground and under saddle! Thank you to Gerry Ibanez for investing in our future and adding another top horse to our string ensuring that we have a pipeline of talent," said Lockman.

The 20-year old Trakehner licensed Grand Prix stallion Kaiserdom (by Van Deyk x Gajus x Gunnar) sold to British stallion owner Suzanne Lavendera (née Davies) back in March 2019. Kaiserdom was the 2005 Bundeschampion under Kathrin Meyer zu Strohen and trained up to Grand Prix level, but she never competed the stallion internationally. Mayer zu Strohen rode him a select number of local shows in North Germany between 2012 and 2014, his last being Elmlohe in August 2014. After years away from the spotlight the black stallion resurfaced in the U.K. in 2017 having sold to Cara Sweeney. Lavendera has purchased the 20-year old to add to her stallion roster.

The 9-year old Dutch FEI pony Den Ostrik's Macho (by Good Looking) has a new rider. Dutch pony team rider Evi van Rooij, who will go into her last year on ponies in 2020, handed over the ride to 13-year old Quinty van der Lee. Van Roij competed Den Ostrik's Macho internationally the past three years with just one CDI start per year: Exloo in 2017, Nieuw en St. Joosland in 2018 and Exloo in 2019.  Van Rooij wll focus on her top pony King Stayerhof's Jango and her horse Edea (by Johnson) in 2020.

Dutch Grand Prix rider Jessica Leijser is pregnant. The 31-year old Leijser and her partner Niels Valkenburg are expected their first child in May 2020.

Just two weeks into his retirement from sport, Lisanne Zoutendijk's U25 horse Watteau passed away. The 16-year old Dutch warmblood gelding (by Jazz x Houston x Democraat) died of an aortic rupture in the field.

Klaus Balkenhol celebrated his 80th birthday on the island of Sylt on 6 December 2019. Riding Master Balkenhol was a student of Paul Stecken and member of the German team at the 1991, 1993 and 1995 European Championships, 1994 World Equestrian Games and 1992 and 1996 Olympic Games in Atlanta.  He was team trainer for Germany and the U.S.A. He currently still coaches Laura Tomlinson and Therese Nilshagen as well as daughter Anabel Balkenhol.