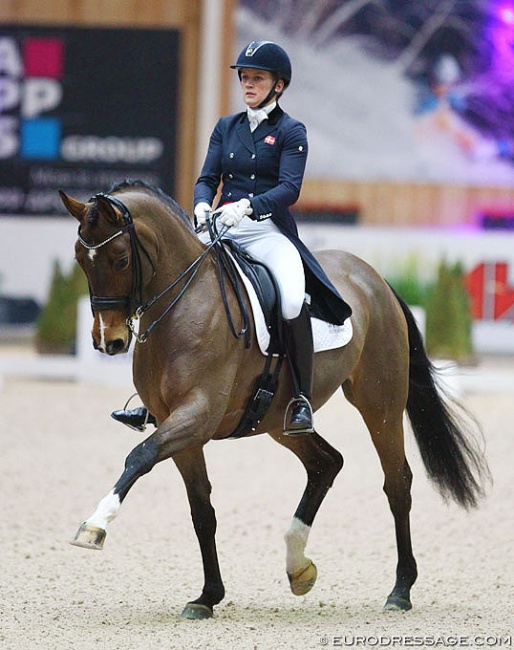 Saadan Que is an 11-year old Danish warmblood mare by Quaterback out of Skovbogaards Royal Anky (by Royal Diamond).

The horse made its show debut as a 5-year old in Denmark at national level in 2013 under Ida Sofie Daugaard Hulstrøm, who took him from novice to M-level.

In 2016 she sold to the Merrald family and became Nanna's new horse. She competed him at small tour level that year and took him to Grand Prix level in 2017. They made their international show debut at Under 25 level at the 2018 CDI Lier, where they won the Kur to Music.

Merrald and Saadan Que - also spelled Sådan Que in Danish - represented Denmark at the 2018 European Under 25 Championships in Exloo, where they finished 16th in the Kur Finals. In 2019 they competed on the senior circuit at CDI's in Aalborg and Aarhus. The latter show in June was the pair's last start.

Saadan Que arrived in Wellington, Florida, last week, where Lavoie stays for the winter to train and compete.

"I bought her from a video that Andreas sent me the day he got her from Nanna a few weeks ago," Lavoie told Eurodressage. "She’s going amazing. She’s my second Grand Prix horse along with Fine Spirit, who’s doing amazing. Plus Glenn, Feodoro and Fiesta (Danza) are doing Prix St Georges now. So I have 5 FEI horses for the season and am really happy."

Merrald is a professional dressage rider, part of the team at Blue Hors Stud. She is currently showing Wasabi and Blue Hors Zirrus and is expected to make a Grand Prix debut on Blue Hors St Schufro in 2020.