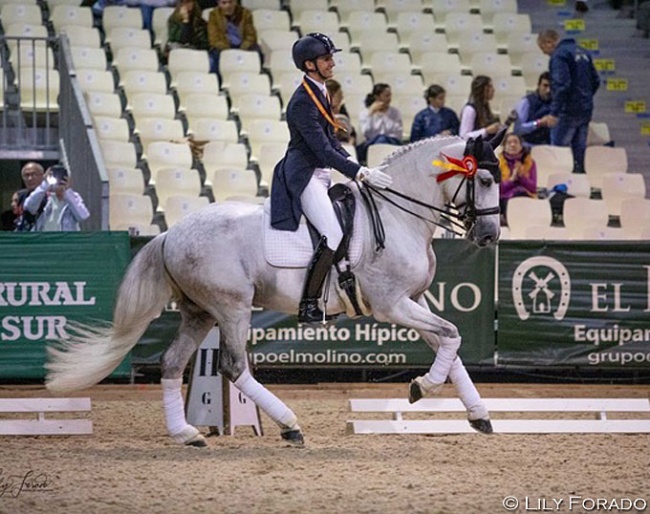 Three weeks ago, SICAB was the world epicenter of the Purebred Spanish horse. The International Horse Show began its 29th edition in Seville on Tuesday 19 November 2019 and concluded  with the proclamation of champions on Sunday 24 November 2019.

A large number  of 1075 horses participated, belonging to 343 national and international breeders, were the great protagonists. KWPN has S-Hertogenbosch, the Oldenburg horse has Vechta, the Hanoverian horse has Verden and the P.R.E has SICAB.

In the sports field, after a very long qualifying season in the Dressage COPA ANCCE circuit, the best representatives of each level fought for the world title. From the 91 horses, we must highlight two: Guateque I” and Romero de Trujillo.

Last edition, there was already a strong brushstroke of the strength of the American Breeders. The horses from Hampton Green Farm and Yeguada Trujillo shone with their own light, achieving various metals in their respective levels.  A year later, that foreign brushstroke gained more color and the American Breeders Coves Darden and Yeguada Trujillo broke through with more power.

The bets were on a great American duel in the Small Tour level.  Relative to the Pr. St. Georges/Inter 1 level, Juan Matute Guimón riding Guateque IV (Horse bred in the USA and owned by Coves Darden) went for the golden way. With the scores of 72.147 in Pr. St. Georges and 74.740 in the Freestyle, ended his participation in SICAB with the best closure possible: to be World Champion (73.444%). Romero de Trujillo, under the reins of Teia Hernández, obtained the silver medal.

Leaving aside the sports part of classical horse ballet, the Morphology classes had also a great foreign presence. In this edition, as a great novelty, it was implemented a new format for the Morphology contest, a system of previous semifinals during the first days of SICAB.

A very significative change that gave a lot of play until the end. The main course of the week were the finals and special awards. The breeders Yeguada Trujillo (USA), Batan (Mexico) and Morerías (Mexico) landed in SICAB with all their competition army, their great assets and they didn’t disappoint.

The first great round of the week was the Functionality class. “Romero de Trujillo”,  the grey prevailed in the classification with the impressive score of 19.344. That result allowed him to be crowned as Functionality World Champion.

On Sunday, with very little to lose and a lot to win, the atmosphere in the bleachers of Pavilion 3 was easy to feel and the silence was loud. All the effort of the season has always been the Special Awards: Best Movement Champions (Adult and Young) and the Champion of the Show, both in Young and Adult.

The first great battle was given between the aspiring to the title of Best Mover Adult Champion. After a great presentation from seven horses, the judges were split and presented a tie between “Romero de Trujillo” and “Tlaloc MOR”. At that moment, the audience did not give credit and consequently both horses had to repeat their presentation. After a few frantic waiting minutes, the duel between these two great talismans went to “Tlaloc MOR” from Yeguada Morerías. The first two classified mares of the Adult Sections (7-9-11) fought the coveted title of Female World Champion. The title was between the eternal champion “Panadera LVIII” from Maria Fernanda de la Escalera and “Primavera BAT”. Finally, “Primavera BAT” rose with the title.

The final to die for was the one for Male Adult Champion. All of them  showed its great beauty, its round shapes, but “Romero de Trujillo” and “Virrey Mor” stood out. Once again the American Breeder and the Mexican Breer met. Finally, Romero de Trujillo won and five years after his first title of World Champion of 2015, he re-hung the band and received the ribbon as World Champion. “Virrey Mor” obtained the title of Runner-up.

SICAB is a motivation for the breeders, there where the P.R.E. exhibits its best ornaments. International reference for all breed lovers, SICAB is the showcase of the Purebred Spanish Horse.

This edition, more international than ever, North American horses shone in Dressage and Mexican horses excelled in Morphology.

Congratulations to the great labor from the National as the International breeders for their great work and for continuing the legacy of the P.R.E breed whose goal is always to improve in Morphology and Functionality.