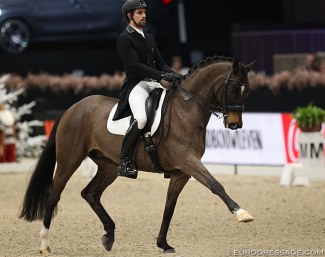 Vandenberghe and the 12-year old Rhinelander gelding Santiago Song (by Sir Donnerhall x Larome) dominated the Prix St Georges, the opening dressage class of the 2019 CDI-W Mechelen on Saturday 28 December. The 30-year old rider rounded off an already highly successful international show season in 2019 with another victory on home turf.

Coached by Carmen De Bondt, Thibault and his dark bay gelding showed very elegant, light footed trot work with good balance in the traversal movements. The horse was impressed by the electric atmosphere in this indoor arena and did not fully relax in the extended walk to achieve sufficient ground cover. Also in the extended trot he could have swung more through the back. The canter tour was very well ridden and the judges rewarded him with a winning 71.588%.

Thibault, who bought Santiago Song as a 3.5 year old in the autumn of 2010 and trained him to FEI level himself, went on to place fourth in the Kur to Music on Saturday with 75.060 %.

Dutch para team trainer and national dressage judge Joyce Heuitink brought 8-year old KWPN bred Gaudi Vita (by Apache x Welt Hit II) to Mechelen for his final small tour competition.  The horse has already been competing at Grand Prix level in The Netherlands after two CDI seasons at small tour level. Out of the twelve international classes that the pair rode in Exloo, Mechelen, Sint-Truiden, and Aachen, it won no less than seven of them!

They were the favourites for the victory in the Prix St Georges, but a spook on the centerline right after the halt at X caught his rider off guard and made her going off course immediately afterwards. Heuitink then recovered and produced excellent work in trot and canter. Gaudi Vita, who has gained much muscle this year, showed very established tempi changes. Despite two major hiccups, they still scored 69.882% for fourth place in the Prix St. Georges. They set the record straight on Saturday and delivered the winning Intermediaire I kur to music with 78.245 %

Belgian 34-year old Inge Heylen made her international show debut on the 9-year old Belgian warmblood Kalagan H (by Universal x Wundermeyer) just four months ago at the CDI Waregem and her scores have improving ever since. In Le Mans she rode her first 70% and the rider repeated that feat in Mechelen.

Her chestnut Kalagan has a lovely frontleg with knee action in trot and the canter is uphill. Although the trot extensions were a bit hurried, the lateral movements were smooth. The extended walk had good clarity of rhythm but there could have been more overstep. Heylen kept her hands quiet on the withers and the bridle contact was steady, although it would be nice to see the nose a bit more out. As Kalagan has a strong uphill canter, the tempi changes and extension were pleasing to the eye and the pirouettes good with the left one being the better one. The pair has much potential for growth in the future. They scored 70.441% to place third in the Prix St Georges.

On Saturday they reconfirmed their form and were third again with  75.265%.