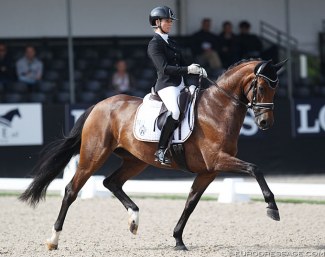 Espe, one of the most talked about horses at the 2019 World Young Horse Championships, has been sold to British pony team rider Annabella Pidgley.

Espe is a 6-year old Westfalian mare by Escolar x Dimaggio. She is bred by Walter and Hedda Droege.

The bright bay mare was presented at mare shows in Westfalen as a 3-year old while she was slowly started by Hedda Droege.  Hedda competed her lightly and rode the mare in the spotlight at their last show together, an L-level class at a local event in Lienen in May 2019. Droege sold her to Andreas Helgstrand and business partner Stutteri EVO soon after.

One month later Espe won the Bundeschampionate qualifier in Hagen under Eva Möller and got selected to represent Germany at the 2019 World Young Horse Championships in Ermelo, The Netherlands. The pair won a place in the finals by winning the consolation class and ended up placing 11th with 8.68 points, after earning 8 for walk, 8.9 for trot, 9 for canter, 8.3 for submission and 9.2 for general impression. At the Bundeschampionate in Warendorf  she was 7th in the Finals.

In November Espe moved from Eva Möller's base in Hagen, Germany, to Helgstrand Dressage in Denmark to be sold. Severo Jurado Lopez rode her in the sales video and the mare sold soon afterwards to Tony and Sarah Pidgley, parents of 15-year old Annabella Pidgley.

Based at Kilbees farm in Windsor, Annabella is a member of the British pony team. She also owns FEI pony Ine. With Cognac she placed 11th in the Kur to Music Finals at the 2019 European Pony Championsips in Strzegom, Poland.

Annabella is coached by her mother, British 4* judge Sarah Pidgley at home, alongside Danish number 1 Grand Prix rider Cathrine Dufour who flies regularly to the U.K.

"I am very lucky to have my parents' support to be able to buy young horses to train for my future and I'm exceptionally pleased to have my trainer Cathrine Dufour's support," Annabella told Eurodressage.

Annabella has one more year to go on ponies and has decided to continue competing Cognac in 2020, but has outgrown Ine. There are no immediate plans to bring one of the horses home for a junior rider career "until later in the year."

"I have three horses in training and I am very interested to see how they progress with Catherine over the coming year before I decide which one I will bring home and begin my junior career with," Annabella added.