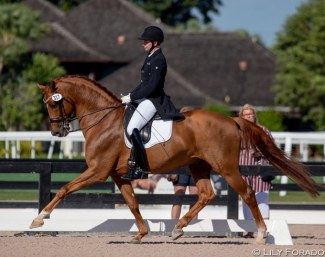 Five Star, the winner of the silver medal at the 2016 World Championships for young dressage horses, has resurfaced in Wellington, Florida, in Russian ownership.

Life in The Netherlands

As a youngster he was owned by the Singaporean Titas Wilaras, who had Platinum Stables in Riel, The Netherlands.

Under Kirsten Brouwer the beautiful chestnut won silver at the 2016 World Championships for Young Dressage Horses in Ermelo, The Netherlands, behind Fiontini. As of 2018 Five Star was then ridden by Spanish Antonio Laiz Zandio but he never took the horse to a CDI even though his other ride Eye Catcher did a string of competitions that year.

Wilaras' business in The Netherlands had been struggling with staff continuancy and numerous lawsuits from creditors in 2018 - 2019 and in a major sweep there was a sell out of his farm in the spring of 2019. Andreas Helgstrand acquired Wilaras' best horses - Eye Catcher and Five Star - in March and the bulk was sold to Dutch horse dealers Vermunt and Bruinier in a blow out sale.

Olga was trained by David Marcus and Nicholas Fyffe who went shopping with her and found Five Star at Helgstrand's in Denmark in April 2019.

Olga, who last year competed Sandro Man in the Amateur CDI small tour classes, rode her first show on Five Star herself in September and as of October, new trainer Kevin Kohmann began competing the chestnut.

At the beginning of the 2020 Global Dressage Festival in Wellington, Five Star was entered in the first national show on the new season on Saturday 4 January 2020 under Kohmann.  The pair was entered for the Prix St Georges but the online score service has not yet posted the results.

Ozerova runs Business Development at CaptiveOne Advisors, a corporate insurance agency that is one of the title sponsors of the Wellington Equestrian Festival.