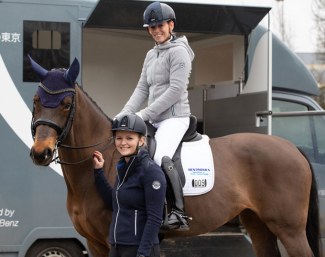 Dutch para dressage rider Rixt van der Horst is gearing up for 2020 Tokyo Paralympic qualification with a new coach and a new training base.

The Friesian rider has relocated all the way to the South of Holland to locate herself in Veldhoven, close to Eindhoven, The Netherlands, to be closer to her trainer  Chantal van Luttervelt and her boyfriend's job in Waalre.  Rixt was previously trained by Fenna Roefs.

"We're now at a facility where we have every thing we need: big boxes, an outdoor and an indoor with good footing, a walker, a lunge ring and plenty of pastures," said Van der Horst. "We changed a lot in the lead up to Tokyo. It's exciting, but now all the pieces are slowly coming together."

Coach Chantal trains Rixt five days per week and rides the Findsley for the warm-up part, both at home and at competitions.

Van der Horst competes the 10-year old KWPN mareFindsley (by Belissimo M x Obelisk), who has been submitted to the NOP foundation which sponsors the owners of horses so that the ride is preserved  for Dutch Olympic athletes.

At the 2019 European Para Championships in Rotterdam last summer, the Grade III rider won team gold and double individual silver.  Four months later they did their first show again at the end of December at a regional event in Hellendoorn, The Netherlands. Her next show will be the CDI-W Amsterdam this weekend, followed by Doha in March.

The 1992 born Rixt was born 10 weeks prematurely together with her twin brother Brend while her parents were on a holiday in Luxembourg. She has a form of cerebral palsy called spastic diplegia as a result of a lack of oxygen during birth. In 2012 she was diagnosed with Parry–Romberg syndrome, a condition characterised by progressive shrinkage and degeneration of the tissues beneath the skin.