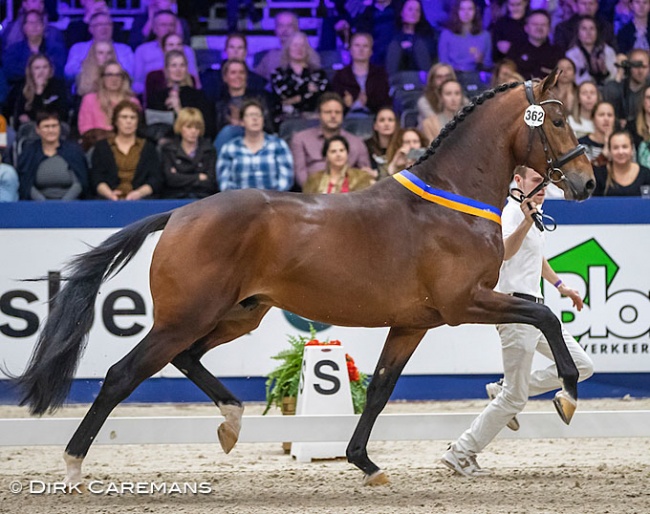 The premium stallion Monte Carlo has been purchased for 50% by the Danish Blue Hors stud. It now co-owns the stallion with breeder Tim Coomans, and co-investors Joop van Uytert and Nico Witte.

Monte Carlo (by Dream Boy x United x Jazz) will move to Denmark, where he will stand at stud and be trained by the Blue Hors riders.

"When we saw the stallion for the licensing in The Netherlands, he stood out in movement and attracted the attention. That is why I contacted one of the owners, stallion keeper van Uytert, and we agreed that after our stallion show in Vechta, Germany, we could drive on to The Netherlands to try Blue Hors Monte Carlo. Both Nanna (Skodborg Merrald), Daniel (Bachmann Andersen) and I were very excited and could clearly see its potential for the big work in the future. I think it's a super exciting blood combination that we haven't seen in Denmark so far," says Blue Hors' breeding director Martin Klavsen.

The approved 3-year old Maddox Mart (by Hennessy x  Bordeaux x Ferro) has been sold to Ann-Kathrin Linsenhoff of Gestut Schafhof in Germany.  The black can become a future horse for Linsenhoff's step son Matthias Rath.

Both Monte Carlo and Maddox Mart will still have to complete their stallion performance test to become fully approved for breeding for the KWPN studbook.