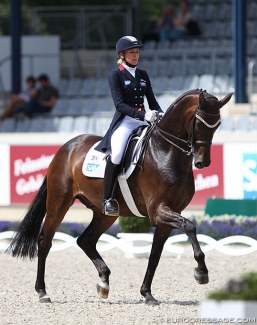 Russian investor Elena Knyaginicheva has allocated the ride on Bluetooth to Russian Anna Pyrkina as a Russian Olympic team hopeful for the 2020 Tokyo Games.

Knyaginicheva acquired Bluetooth as a 3-year old at the 2013 PSI Auction for 1 million euro.

The gelding was first competed by Eva Möller as a 5-year old and by Steffen Frahm as a 6-year old. Frahm took him to the 2016 World Young Horse Championships in Ermelo and finished 11th in the Finals.

Insa Hansen then took over the ride and developed him to FEI level. She showed the horse in the small tour classes at the 2018 CDI Hagen.

In the spring of 2018 Knyaginicheva decided to send the tall bay gelding to Ingrid Klimke.

Klimke trained him to Grand Prix and focused mainly on competing him at national level. They did one CDI, the 2018 CDIO Aachen at small tour level, where they won the Intermediaire I.  They also competed in the 2018 Nurnberger Burgpokal finals for Developing Prix St Georges Horses and finished third.

In 2019 the pair rode in the Louisdor Cup finals for German Developing Grand Prix horses and finished 10th.

"To my great surprise and for us all fully unexpected, Bluetooth left my stable in Munster four weeks ago," Ingrid took to Facebook three days ago. "We miss the big bay with his lovely temperament a lot."

Knyaginicheva received a request from the Russian Equestrian Federation to make her horse available as an Olympic team hopeful. After careful consideration, Elena agreed to support this prestigious Olympic project for her country.

"It was all a bit unexpected, also for me," Elena told Eurodressage. "We spoke with Ingrid and I am grateful that she also understood my position. I am very grateful to Insa Hansen who rode Bluetooth until he was 8 and lots of thanks go out to Ingrid, who successfully competed him and developed him so well."

Bluetooth has moved back to Hof Kasselmann in Hagen a month ago, where Anna Pyrkina is preparing him for Olympic team qualification under the supervision of Insa Hansen and Russian team trainer Ferdi Eilberg.

"First the rider needs to get used to the horse," Elena explained about Bluetooth's show schedule to qualify for the team. "I hope it will go well. He's an amazing horse with an amazing character. Let's not forget he's just 10 years old and not experienced at Grand Prix. We will see how this month goes before we decide on a show plan.  In the next three weeks we'll decide where exactly he'll compete first, but we have Horses & Dream CDI Hagen (23 - 26 April 2020) in mind."

Russia qualified a team for the 2020 Olympic Games by winning the Group C Dressage qualifier staged at Maxima Park in Moscow (RUS) on Sunday 23 June 2019. However on 11 December 2019, the World Anti-Doping Agency (WADA) has voted unanimously to exclude Russia from sports for four years including the 2020 Tokyo Olympics.

For equestrian sport this means that  Russian athletes will be allowed to field a team of three in Tokyo, but they will be competing under a neutral flag. The three dressage team riders will need to undergo special doping testing before the event.