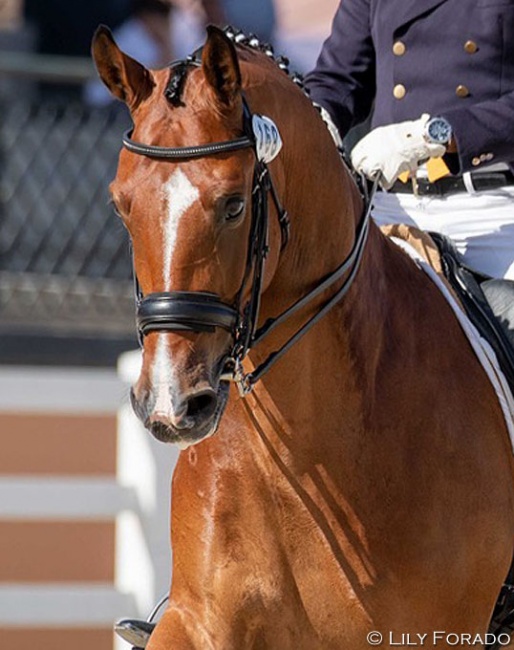 Hudson M achieved his first successes in the show ring as a youngster in Spain. Antonio José Vázquez trained the horse from novice level up to Prix St Georges.

In 2019 the pair won bronze medal in the 7-year division at the Spanish Young Horse Championships with scores above 74% and they competed in two international shows, the CDI's in Sevilla and Granada, where they won three out of four classes.

Supporting the Next Generation

Yamazaki has decided to sponsor the next generation of American riders, which includes Dawn White-O'Connor, as well as her own two daughters, Miki and Emi Yang, who are highly competitive in pony and junior dressage sport as well as vaulting.

At age 10 Miki was the youngest member of the U.S. Vaulting Team at the 2014 World Equestrian Games in Caen, France, and then went on to become the first ever U.S. Children's Dressage Champion in 2018. In 2019 she was the reserve champion at the U.S. FEI Pony Championships. Miki has made the transition to junior level. The 11-year old Emi is an international vaulter for Team U.S.A.

In 2019 the 30-year old Dawn White-O' Connor began her independent training business as a professional in Southern California. She gained her experience having worked first as a groom and then an assistant trainer for Steffen Peters for 12 years.

Akiko and Dawn's close collaboration started in 2017, when Dawn received the ride on her U.S. Rio Olympic team horse Legolas (by Laomedon) as a Grand Prix schoolmaster.

In 2018 Dawn was given the Oldenburg gelding Bailarino (by Breitling W x De Niro), with whom she won the 2018 U.S. Developing Grand Prix Horse Championships.

Akiko has also entrusted her with the 9-year old Galeno Gimli (by Ravel x Locksley II) to develop.

Yamazaki had also supported the US Equestrian Federation’s Developing Rider Program for many years, first under Debbie McDonald as a coach and now Charlotte Bredahl. "Many riders in the program have gone on to become members of Team USA in international competitions," said Akiko.

Dawn White-O'Connor will be able to shift her competition career into the next gear with Grand Prix hopeful Hudson M.

Akiko, who is a highly accomplished Grand Prix rider in her own right, has purchased numerous horses through Arl, each time relying on the experienced horse scout to find her the right top quality with proven rideability.

Chopin, Donovan, Gronskovlunds Romeeo, Ascot de Massa, and Rosamunde were all sourced for Akiko through Jochen.

"I'm thrilled to have the continued confidence and support from Akiko to procure her with the best and most talented horses Europe has to offer," Jochen explained. "Akiko is a real horse person at heart and I applaud her vision to support rising talent in the U.S.A.. She provides them with horses of international calibre that are perfectluy matched to the rider's potential and skill."