Carier Bergeron and Sound of Silence Make Magic with "Patience, Love and Determination" 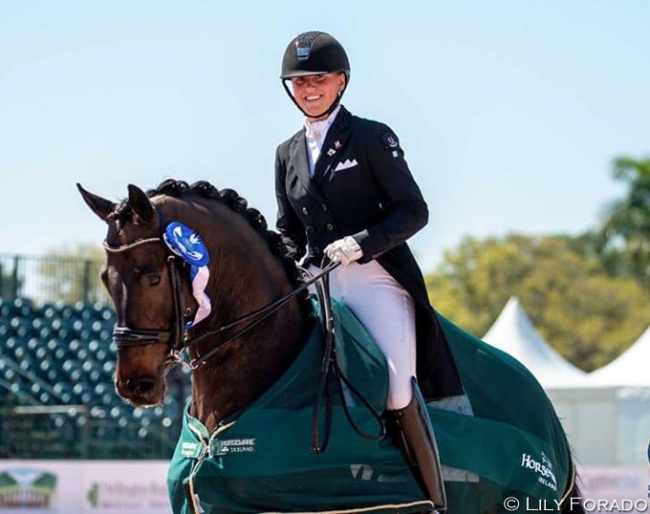 A 2018 North American Youth Championships (NAYC) team gold medalist, Carier Bergeron steered her father Gilles' 12-year-old Westfalian gelding Sound of Silence (by San Amour I x Limes x Pablo) to 71.667% in the team test, a winning 73.837% in the individual test and a personal best of 77.150% in the freestyle.

"Sound of Silence felt amazing," Camille told Eurodressage. "He was just so calm and so soft in his body. He was totally focus on me and willing to give his best. I couldn’t have asked more from him."

Her magical seventy % scores of that weekend bumped her into 8th place on the FEI Dressage World Young Riders Ranking.

“I still have a hard time believing that it’s true,” Camille gushed.

"With Patience, Love and Determination"

Camille purchased Sound of Silence as a 7-year old at the 2015 Klosterhof Medingen auction in Germany and began riding him in 2017. They have been together now for a little less than three years.

When Camille was matched to her dark bay gelding she was 17 and had just begun to compete at Young Riders' level. Her partnership with Sound of Silence was not smooth sailing from the start.

“Looking back to 2017, I remember being barely able to do a full training level test," she admitted. "At a young age, he sure was very talented but he didn’t have much motivation. It took a very long time before he started to trust me and wanted to work for me and please me. Honestly, if someone would have told me three years ago that I would be scoring over 73% with him, I would have laughed and thought that he was very silly.”

Camille credits her support team for working their magic and turning the two of them in a solid and successful combination.

"We went through some very difficult times together, but I was very lucky to have amazing people behind me who kept believing in us and supporting us in our lows and highs, especially Pia Fortmüller, who trained him and I until last fall," she stated. "I sure can say that this horse taught me a very good lesson: with patience, love and determination, everything is possible."

In the autumn of 2019 the Mascouche, QC, native moved back to Montréal after two year on the road. She started to train with Canadian WEG team rider and Pan American team gold and individual silver medalist Brittany-Fraser to expand her horizons.

"Although we haven’t been training together for a long time, I feel the training is really going in the right direction and I am looking forward to the future," said Camille. "It is going to be a very inspiring summer.  I will be boarding at Naima Laliberté's private stable with Brittany."

As of 2019 Camile also began competing in the Under 25 Grand Prix division aboard Acoeur, a 13-year old Baden Wurttemberger gelding by Acordelli x Ricardo. Her goal for this year is to gain Grand Prix mileage with Acoeur while preparing Sound of Silence for U25.

"We are working on the U25 at home, but I only take what he wants to give me and we do it at his own rhythm," she said. "I hope to qualify for the North American Youth Championships."

Carier Bergeron is no stranger to the North American Youth Championships. She rode her first NAYC at junior level in 2014, winning individual and freestyle gold with the Trakehner Lowelas. In 2015 she returned with Delfiano and got individual silver and kur bronze. In 2018 she partnered with the KWPN gelding Baldacci and won team gold. Last year she rode Sound of Silence and just missed out on the podium with a fourth place in the individual. This year she hopes to return, on a mission.

"I have personal goals I want to achieve, but I’m aiming to be on the podium. Eventually, I would like to compete with him in some European shows," she concluded.