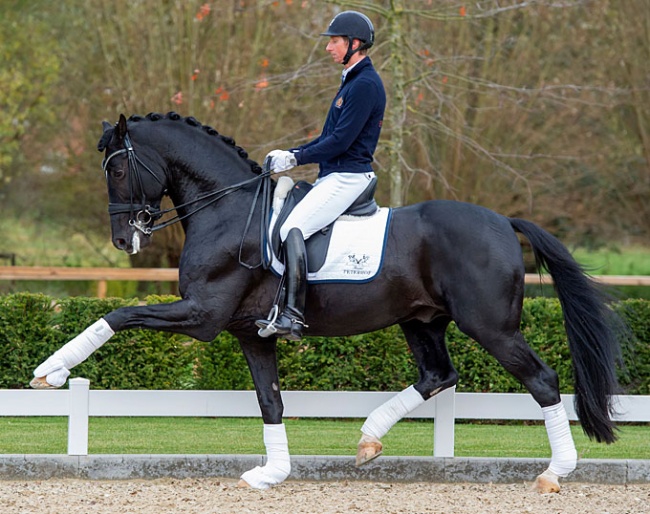 The  elite stallion Sezuan has been proclaimed Danish Warmblood Stallion of the Year 2020 at the DWB stallion licensing in Herning, Denmark, on 5 - 8 March 2020.

The 11-year old black stallion (by Zack x Don Schufro), bred by Linette Jaeger and owned by Arlette Jasper-Kohl, was remarkably absent from his own celebration ceremony in Herning. Instead a video message was played, which was recorded at the end of February 2020.

"Sezuan has stamped Danish horse breeding on the hippological world map, by siring numerous licensed sons, top premium mares and sport horses and he has branded his name as a producer of outstanding dressage offspring," a DWB press release read.

In his stallion performance test, Sezuan scored ten times 10. He competed up to international small tour level and was the World Young Horse Champion as a 5, 6 and 7-year old under Dorothee Schneider.

The stallion's last competition was in September 2017, his last public appearance in Herning in March 2018. In November 2019 owner Kohl had to do rumour control as the news went round that Sezuan was for sale.

Sezuan was proclaimed Elite Stallion by the Danish Warmblood society in November 2019.

"We are very proud of Sezuan," said Edwin and Arlette Jasper-Kohl. "The Stallion of the Year award is a recognition of his terrific sporting successes and his offspring that are increasingly pushing into the limelight on almost every continen. Sezuan is in full training and is scheduled to enter the Grand Prix class this year. He will be presented at the shows by the Swedish world class rider, Patrik Kittel."