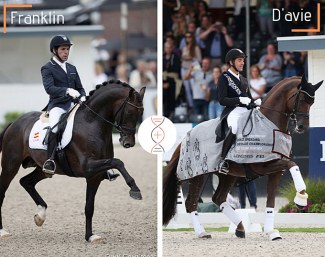 Get yourself an in utero foal or a broodmare in foal with prestigious bloodlines and the best German and Dutch dam lines. You will also find straws from the best stallions in the world.

Horse in the spotlight: LOT 2 - In Utero Foal, out of the full sister of VANCOUVER K, 5th at the European Championships 2019 by Fürsten-Look!

Unique! A future top competitor with Fursten-Look and Phantastia, the full sister of Vancouver K. He finished 5th at the Rotterdam European Championships in 2019 with 85%5 under the saddle of Judy Reynolds. In 2016, 2017 and 2019, Vancouver K competed in the World Cup finals in Gothenburg and Omaha. Vancouver K won the CDI4* of New York in 2016 and participated in the Rio Olympic Games. Vancouver K also participated at the European Championship in 2015 and the World Games in 2014. Fursten-Look, is for sure the stallion to look for in the next years with his Bronze Medal at the World Championships for young horses with Isabel Freese.

Horse in the spotlight: LOT 4 - Get a horse for the High Level: Vitalis out of the full sister of the stallion star FOUNDATION and GLOCK’S FLAVIO

Have you ever dreamt about getting yourself a foal to be born from a line of performers? Look no further: Vitalis with the full sister of the stallion star of Matthias Rath, Foundation (3rd in the 5 * Grand Prix of Doha), Glock's Flavio, ridden by Hans Peter Mindherhoud and Crystal Friendship, winner in international Small Tour under the Anabel Balkenhol's saddle. Frau Pigge is also the full sister of Donna Wenita, dam of Serge Gainsbourg, sold as a foal this year for 150,000e to Helgstrand Dressage. Vitalis is a champion himself and his production as well: Valverde, First-step Valentin, Victoria Secret, ...

Horse in the spotlight: LOT 8 - In Utero Foal by Franklin out the dam of D’AVIE !

Horse in the spotlight: LOT 3 - RARE! In utero foal out of dam TALENT, World Equestrian Games and Winner in Grand Prix 3*, by Secret

Rare opportunity to acquire a foal to be born directly from a dam who participated at the World Equestrian Games and winner Grand Prix 3*! Under the saddle of Grete Ayache, Talent shone on the international scene: 3rd in the Grand Prix of the Nations Cup at the CDIO5 * of Compiègne with 69%, 2nd in the Grand Prix and the Grand Prix Freestyle at the World Cup of Lipica (SLO) with 73%8 and 2nd in the Freestyle at the CDI3 * of Jerez de la Frontera (ESP). The sire of the embryo is Secret, the reserve World Champion of the 5 years old under the saddle of Jessica Lynn Thomas for Sweden.

Horse in the spotlight: LOT 11 - Zarina II, in foal to Ferro. She is a daughter of Tarina, International Grand Prix, damline of performers and stallions IMPOSANTOS and Tolando

Zarina II is the daughter of Tarina who participated with success at International Grand Prix 3* under the dutch Katja Gevers. Tarina is also the sister of Zarina, who produced Imposantos, the approved stallion 5th in the 6-year-old World Championships with 89% under the saddle of Bart Veeze (NED). We also found in this damline, the approved stallion Tolando, as well as Erina, Winner in International small tour 3 * under the saddle of the Dutch Thamar Zweistra with more than 74%. Zarina II is in foal to Ferro, who is one of the most successful stallions and where his influence flows through the veins of his approved sons.

You will also find straws of semen by DON PRIMERO, SEZUAN and DESPERADOS FRH.

To be able to bid the day of the auction, don’t forget to create your profile on Ekestrian’s website: https://www.ekestrian.com/en/register

For any question about the lots or the auction, contact the Ekestrian team by phone at +33.7.71.27.10.76 or by e-mail at caroduf.ek@gmail.com or contact@ekestrian.com