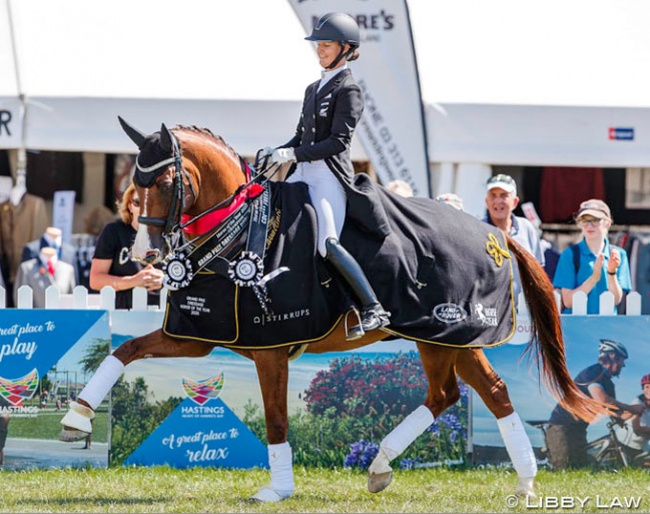 Young rider Brina Carpenter and Grand Prix rider Melissa Galloway grabbed the titles at the second most prestigious dressage competition on the annual New Zealand calendar, the Horse of the Year Show, in Hastings on 13 - 15 March 2020.

The NZ Grand Prix Dressage Horse of the Year title is decided over three classes, the Grand Prix, the Special and Freestyle, at this CDI 3* event. A smaller field lined up than seen in previous years with just eight combinations presenting for the CDI trot up and two combinations in the CDN.

Unfortunately, the effects of Covid-19 were starting to become apparent globally resulting in FEI 4* Sandy Hotz from the USA electing not to make the trip at short notice and in the circumstances the FEI gave a dispensation for just four judges to officiate on the CDI 3* but the CIY less affected with the OC being able to reduce the number of judges from five to three.

Ridden with a smile by South Island based 27-year old Melissa Galloway at just his second second CDI, the 9-year old Windermere J'Obei (b Johnson x Pompei xx) again showed the form that attracted such huge interest at the CDI Willinga Park in Australia in February.

The judges Susan Hoevenaars, Mary Seefried, Susan Hobson & Betty Brown awarded 69.6% for a very confident and consistent test which showed easy expressive changes, and was good enough to keep the pair 3% ahead of their nearest rivals, William "Bill" Millar and the 16-year old New Zealand bred Hanoverian gelding Raukura Satori MH (by De Niro x Genius), owned by Rosemary Carter and Brett Kendall. Satori has such a classic piaffe with wonderful rhythm and lowering of the quarter, the judges scoring this as a highlight with a sprinkling of 8’s. The age difference between the first and second riders spans four decades – what a wonderfully ageless sport!

Seven combinations riders qualified for the Special and the Freestyle. The Special was another victory for Galloway and Windermere J'Obei on 70.19%. Manawatu based Australian rider Cooper Oborn riding Belinda and Emily Stuchbery’s mare Aphrodite (by Anamour x Jacinto xx) rode a stylish beautifully balanced test for second just ahead of 66.89 with Satori third on 66.28%.

The Freestyle resulted in three from three for Galloway, this time on 73.99% but the next places changed yet again. Victoria Wall and the elegant lightfooted 13-year old NZL bred Hanoverian mare Letty Lei EDH (by Limonit x Mantari xx) had withdrawn from the Special owing to a niggling rider injury but was cleared to ride in the Freestyle scoring 70.45% for second.

When the results of all three tests were combined, Windermere JObèi was crowned the Grand Prix Horse of the Year and William Millar on Raukura Satori MH runner up.

Galloway's Windermere J'Obei is bred by David Woolley and is registered as a New Zealand warmblood horse.

Four Young Riders contested the CDIY – all new combinations to the level this season.

The Preliminary Test was won by Wellington’s Lilly Jefferies on the 14-year old domestically bred Lindisfarne Laureate (by Lessing x Worldwide PB), but this pair had to settle for second place to Auckland’s Brina Carpenter and the 11-year old NZL Hanoverian mare Leo Donna (by Don Quattro x Leo Godonov x Leader of the Band xx) in both the Individual Test and the Freestyle to win the NZ Young Dressage Rider of the Year for 2020. The Auckland based Carpenter took over the rode on Leo Donna from Alicia Zeludko, who campaigned the mare in 2019. Young rider Giselle Conway made the 1200 km trip from Queenstown to be rewarded for third.

Brina took to Facebook: "Leo Donna was a superstar winning her warmup test and coming second in the Individual test. Another win in the musical meant we came away Young rider of the year 2020, winning the Pam Weal memorial trophy. I am so excited for our future and I can’t thank Alicia enough for the opportunity to have such an incredible horse, and all the support you have given me."

Sadly this show was the season finale with Taupo CDI this weekend being cancelled because of Covid-19 along with all other NZL national shows for the next three months.