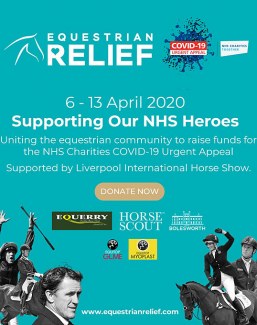 The team behind Bolesworth and Liverpool International Horse Shows have launched a major fundraising initiative to which leading Olympic riders from across the disciplines, as well as horse racing jockeys and celebrities are contributing.

‘Equestrian Relief’ (www.equestrianrelief.com) is an urgent fundraising campaign to raise money and change lives, with donations going directly to support the efforts of the wonderful work being carried out by the NHS.

Each day two members of each team will take part in a daily challenge. The five challenges, which are; On the Gallops, Plankety Plank, Horse Drawn, Showstopper and Dark Horse will test our riders skills physically, creatively and artistically.

Much more will be revealed over the coming days so make sure you join in the fun at 7pm each evening from Monday 6 April - Monday 13 April where our daily highlights will be broadcast across all the Liverpool International Horse Show channels and all info can be found at www.equestrianrelief.com

Unite the horse world to support to the British NHS

Said Nina Barbour, Bolesworth Managing Director: “Our priority is to unite the horse world to support our health workers and our goal is to raise a sum of money that will make a real difference. All donations will go directly to NHS Charities Together Covid-19 Crisis Fund - supporting NHS staff and volunteers on the frontline as they work under pressure and in the most challenging of circumstances.”

“We’ve already got some fabulous sponsors on-board - including long standing Bolesworth supporters Equerry, Equitop and Horse Scout - who have all made generous contributions to get us started.

The campaign will also be launching a charity auction on Monday 6 April with a host of ‘money can’t buy’ experiences up for grabs! Bid for the chance to get one on one with some of our equestrian celebrities for an exclusive Q&A session online, go behind the scenes with ITV racing, or even bid for a round of golf with AP McCoy and Oli Bell. The paintings produced by the teams in the Horse Drawn challenge will also be included in the auction lots!

Equestrian Celebrities Support the Cause

Zara Tindall said: “It’s a very challenging time for the equestrian community right now with so many people affected in so many ways. Being a high-risk activity, we also have a responsibility to minimise the impact on the NHS who are valiantly working to support the nation and save lives. Taking part in Equestrian Relief and knowing that donations are going directly to help NHS workers on the frontline makes it a no-brainer for me. I am happy to be part of this campaign and look forward to seeing just how much we can raise”.

Frankie Dettori said: “I am super excited to announce that I will be taking part in Plankety Plank and Bake Off Easter Showstopper all in aid of Equestrian Relief. It’s going to be great fun, however we are all very competitive so I can’t wait to get started – so please make sure you support us!”

Scott Brash said: “All over the country we are coming together to support the phenomenal NHS staff during these very challenging times. As a strong equestrian community we must stay united in the battle against Covid19 and we are hopeful that Equestrian Relief can make a huge impact in raising funds directly to support those who are putting their own lives at risk to help others. Let the challenges commence and please make sure you support us and give what you can to this incredible cause.”

Ellie Orton, CEO of NHS Charities Together said: “Every person on our team and NHS teams throughout the country, are playing a vital role in being there for others during this emergency. Please join in with the Equestrian Relief team effort by showing your appreciation, gratitude and solidarity for our NHS workers who are responding heroically to the biggest challenge the NHS has ever faced’.

To donate and for details of the Equestrian Relief campaign visit www.equestrianrelief.com or Donate Here