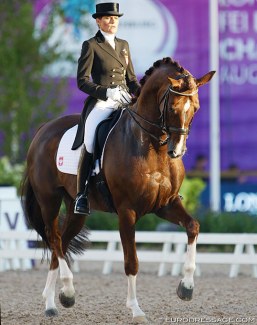 Katarzyna Milczarek's number one Grand Prix horse Dzeko has been sold to the U.S.A. He has been purchased by a syndicate and will be the new competition horse for Mette Rosencrantz.

Dzeko is a 14-year old Oldenburg gelding by Dimaggio out of Chita (by Continue x Rubinstein).

The German based Polish rider Katarzyna Milczarek purchased Dzeko as a 4-year old at the 2010 Summer Mixed Sales in Vechta, Germany, for 35,500 euro.

With no time to waste Milczarek trained the tall liver chestnut up the levels and made her international small tour debut with the 7-year old Dzeko at the 2013 CDI Radzionkow. The pair won the Prix St Feorges and 1.5 month later went to the CDI Brno and won the PSG and Inter I.

In 2014 Dzeko only competed once at international small tour in Radzionkow. In May 2015 he made the transition to medium tour level, in June he was doing the full Grand Prix at age 9 and was immediately selected on the Polish team for the 2015 European Dressage Championships in Aachen, where they finished 63rd in the Grand Prix.

Katarzyna competed him consistently at international Grand Prix level through 2018. In 2017 they were back on the team for the European Dressage Championships in Gothenburg, where they were 42nd in the Grand Prix.

In the summer of 2018 she gave the horse to her son, Tomasz Jasinski, who after one CDI in Falsterbo was selected to compete him at the 2018 European Under 25 Championships in Exloo, where they were 26th in the Short Grand Prix.

In 2019 Katarzyna and Dzeko showed in Sopot, Zakrzow, Hagen and Hamburg. The May CDI in Hamburg was their last international as no 2019 Europeans in Rotterdam followed. However, at the 2019 Polish Championships in September, Dzeko scored his third Polish national Grand Prix Champion's title

A New Chapter in the U.S.A.

At the beginning of 2020 Mette Rosencrantz and her clients Corey Walkey and Robin and Jim Cathey partnered on purchasing Dzeko at Helgstrand Dressage. The horse shipped to California in February.

"I am very happy to ride him, and I love him very much," Rosencrantz told Eurodressage. "He is a beautiful talented horse, and I am excited about the future!!'

Rosencrantz retired her top GP horse Marron, which she also bought in Denmark, in 2019 and needed a new partner for top level sport. She is based in Southern California.

"I get super good help and inspiration from Steffen Peters here at Arroyo Del Mar in San Diego," she explained. "I’m planning on bringing Dzeko out in Grand Prix when the shows will start up again!"