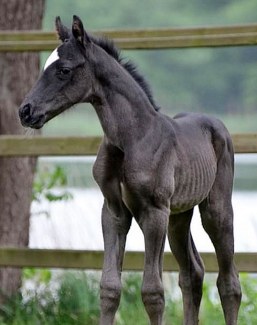 The 2010 World Young Horse Champion mare UNO Donna Unique has become a mum for the fourth time. On 19 May 2020 a black filly by For Romance was born at Gestut Höhenschmark.

She is bred by Joan Andreasen and Søren Melgaard of Stuteri UNO in Denmark and is owned by Edwin and Arlette Jasper-Kohl of Gestüt Peterhof in Germany.

In January 2011 the Kohls acquired the horse as future Grand Prix horse for their sponsored rider Patrik Kittel. The Swede competed her at small tour level until 2012. In 2013 the news broke that the original owner had been embezzled of money because of secret commission fees collected by Helgstrand and Kittel from the 2.7 million euro sales price.

Donna Unique disappeared from the competition arena after Kittel's last ride in the summer of 2012. The mare struggled with injuries. Arlette rode her at home, but a come back to high performance sport never happened.

Two embryos have been successfully flushed and born from Donna Unique at Gestut Peterhof: a 2013 born filly named Sezua and a 2014 born colt by Sezuan named Sezami. Donna Unique delivered her first foal in 2016, a filly named Fil à Fil (by D'Avie).

Fully Retired as a Broodmare

In a Eurodressage interview in 2016, Kohl still expressed hope for a come back to sport, but it never happened.

In 2019 Donna Unique moved to Elisabeth Ahn's Gestut Höhenschmark in the north of Germany, for her full retirement.

Yesterday she delivered her second foal herself, her fourth offspring, a look-a-like black filly with three socks and a diamond on its face. She is by For Romance. The filly has been named Donna Amaris EA and is owned by Ahn.

"I don’t even know how to put my feelings into words about the arrival of this special filly! Dreams do come true and sometimes they are even better than you even dared to dream!  "Donna Amaris EA is everything I could have wished for and more!"