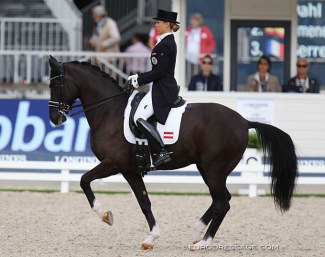 Austrian Grand Prix team rider Karoline Valenta has lost her number one in the barn, Diego.

Diego was a 14-year old Hanoverian gelding by Desperados out of Harmonie (by Hohenstein x Grenadier x Lukas). He was bred by Klaus Michaelis.

The black started its career in Germany as a 3-year old under Meike Friemel. In 2010 he was ridden by Alfons Friedberger, who took him from A-level to M-level until 2012.

In 2019 the combination moved into the senior division at Grand Prix level and with good starts in Mariakalnok, Achleiten and Fritzens were selected to ride on the Austrian team at the 2019 European Dressage Championships in Rotterdam, where they finished 37th in the Grand Prix on 69.379%. At the 2019 Austrian Grand Prix Championships in September, they retired after the Grand Prix. However, they finished the year with a 4th and 5th place at the CDI Salzburg in December 2019, but it turned out to be the combination's last international competition.

Valenta and Diego had not yet made their CDI show debut in 2020 before the corona lockdown. Unfortunately, on 25 May Diego fractured its leg in a freak accident at home in the paddocks and had to be euthanized after full veterinary consultation.