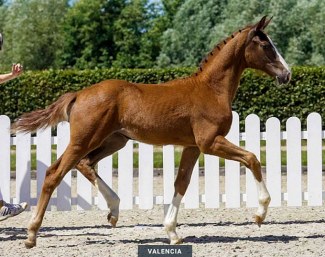 Thirty foals were offered for sale, 25 of them sold to new owners;  the fillies sold best.

Valencia is bred by Carla Bunt-Crum from The Netherlands and is a full sister to the licensed stallion Vaderland. She sold to FK Sporthorses for 24,000 euro and will move to the same yard as Vaderland himself.

The most expensive colt was Vegas (by Viva Gold x Dante Weltino), which fetched 15,000 euro.

Three foals will travel to Scandinavia, one to Switzerland. The average price for a foal was 8,200 euro.

The catalog number one (which is often the foal/horse the auction expects to sell best), Antje Heumann's bay colt Eure Lordschaft (by Escamillo x Ampere) did not reach the reserve price, even though the bidding went all the way up to 45,000 euro. He did not sell.

The average price for a foal at this auction was 8,200 euro.