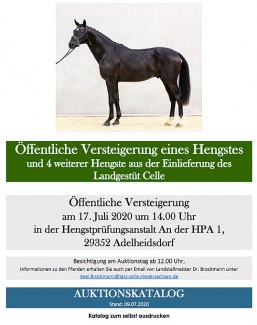 Norwegian horse owner Kirsten Andresen has won the lawsuit concerning the sale/purchase of the young Hanoverian stallion Dario, who turned out to have Shivering.

The stallion will be auctioned in an executorial sale, hosted at the State Stud Celle, on 17 July 2020.

The Dario case was the last drop for the Hanoverian society to fire general manager Dr. Werner Schade in May 2019.

Presented and owned by Ernst Kemper, the 2016 born Hanoverian stallion Dario (by Dancier x Wolkenstein II x Rubinstein) was licensed as a premium stallion at the 2018 Hanoverian Stallion Licensing in Verden.

In his vet report, it stated that Dario suffered from Shivering syndrome, which makes it remarkable that he even was accepted to be licensed in the first place.

Kirsten Andresen sat in the audience at the auction and bought Dario as an impulse buy, without having seen the vet report. The hammer struck down at 120,000 euro.

Andresen signed a joint venture contract with previous owner Ernst Kemper and HV general manager Werner Schade, who represented the Hanoverian society (HV). They agreed the stallion would be re-sold via the 2019 Hanoverian Autumn Elite Auction.

Dario moved to the state stud in Celle where he was kept in training. He did the 14-day Stallion Performance Test in April 2019 but failed the testing with a score of 7.13 points (dressage 7.79, show jumping 6.2).

Dario was not sold at the Elite auction and Andresen no longer felt responsible to cover the Celle bills.

The whole Dario case was a key element in the big organisational overhaul of the Hanoverian society in 2019, which was in rough waters at the time with breeders complaining to the Board of Directors that the HV was no longer in sync' with their needs.

Schade used the official stamp of president Hans-Henning von der Decken to sign the joint venture contract between Kemper/Andresen/HV after discussing the contract with Von der Decken in the car on 20 December 2018 and getting the approval for it. Schade officially had a power of attorney to use that stamp.  However, during the lawsuit Von der Decken claims that Schade used his stamp unauthorized.

In the wake of the Dario case and with the ongoing upheaval within the Board, Schade was fired as general manager and breeding director effective immediately.

Insiders claim that Schade was used as scapegoat to enable the internal restructuring. The position of general manager/breeding director has now been split up and is held by two persons instead of one.

Kirsten Andresen took the Dario case to court to reclaim the purchase price of the horse. On 8 July 2020, the Court of Arbitration ruled in her favour and ordered both the Hanoverian Verband and Ernst Kemper to pay her 105,720 euro with interest. They will also jointly have to pay 13,000 euro for her legal costs.

The ownership of the stallion Dario was automatically transferred back to Kemper and the Hanoverian Verband when the stallion did not sell at the auction, as contractually agreed by the three parties. Therefore, they are responsible for the costs of the upkeep and training of the stallion since that moment.

Dario will be auctioned tomorrow in an executorial sale along with four other stallions from the state stud.