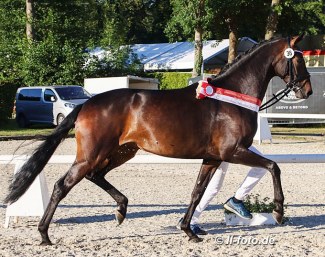 Feine Bella (by Furstenball x Bordeaux) was named the dressage champion of the 2020 Westfalian Elite Mare Show held in Munster-Handorf on 31 July 2020.

The Elite Mare Show of the Westfalian breed society. took place during the "Westfalen Woche"  in hot summer temperatures. Despite some restrictions due to the corona virus, the show take place with an audience that had to register 24hours before entering the show grounds.

In four rings 25 dressage mares were presented to the grading committee, which consisted  of Thomas Münch, Katrin Tosberg, Ralf Johanshon, Dr. Wolfgang Kluge, Gerd Könemann and Whilhelm Weerda.  Nine made were selected for the final ring to compete for the Champion's title.

Feine Bella, by Furstenball out of SPS Bella Vista (by Bordeaux) was named the champion. She is bred by a group of breeders Artmeier, Becker, Delling, and Wibbecke from Witten, Germany.

"She convinced on this day in all aspects. Long legged she presented herself with a lot of cadence and impression. Also in the walk she showed herself loose and with good impulsion," said the grading committee.

The reserve champion is Fiadora (by Fürst Wilhelm out of Verband premium mare Skyline (by Surprice)). She is bred by Fockenberg from Dorsten and owned by ZG Wierling.

"The noble and modern mare, who finished her mare performance test with a dressage final score of 9.0, convinced with a lot of impulsion and forward movement. She is a typey dressage horse with an energetic hind leg," said the committee.

The third ranked mare was Everlove (by Everdale out of Summerlove (by San Remo)). She is bred and owned by Frank Dahlhoff.

Felix Austermann handed the breeders of the honoured mares the gold and silver medal bestowed by the Agricultural Office of the Federal state of Westfalen.