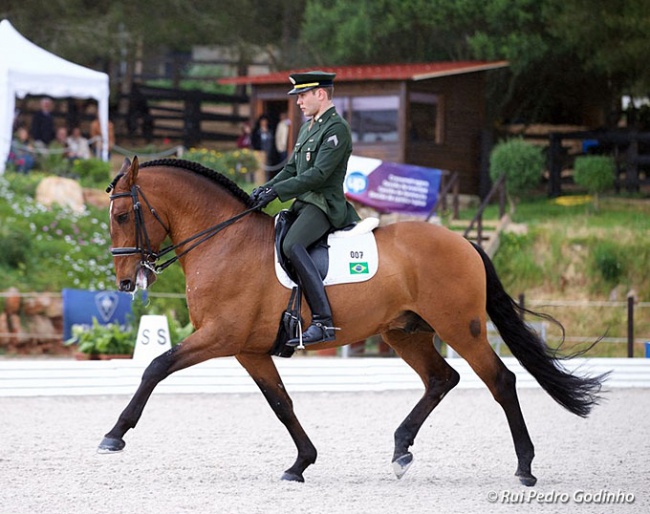 Aron de Massa is a 10-year old Lusitano by Qing de la Font out of Xixirita (by Xaquiro x Universo). He is bred by Sylvain Massa.

The bay was saddle broken and trained at the breeder's yard in France, but never competed.

He sold to Portuguese Leonardo de Melo and Rodrigue Guedes da Cunha and the ride was allocated to Joao Victor Oliva, who trains in Portugal with Paulo Caetano.

The new duo made its international show debut in October 2019 at the CDI Le Mans and further competed at the CDI Randbol in November, the horse was even shipped to the CDI Moscow in December 2019 in a final effort for Brazil to qualify as a team for the Tokyo Olympic.  The team qualification did not happen, but Brazil still has one individual slot to compete in Tokyo in 2021.

Oliva and Aron de Massa showed in four classes at the two back-to-back CDI's in Cascais, Portugal, at the beginning of March 2020 right before the corona lockdown. They achieved a personal best score of 68.217% in the Grand Prix.

Shortly after this performance, the owners decided to end the combination Oliva-Aron and relocate the horse to Cunha's yard Blueberry Farm in Ocala, Florida.

Joao, who is the son of the famous retired female Brazilian basketball player Hortencia Marcari that won silver at the 1996 Atlanta Olympic Games, was aware that Aron was purchased as an investment project and not as his ride for an Olympic campaign.