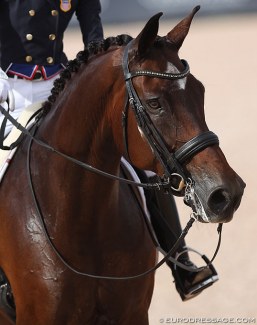 The United States Dressage Federation has announced that Dr. Hilary Clayton of Mason, MI, Gary Rockwell of Wellington, FL, and Verdades, the 2002 KWPN gelding owned by Laura Graves, make up the 2020 class of Roemer Foundation/USDF Hall of Fame Inductees.

Established to honor and preserve the achievements of the people and horses that made outstanding contributions to, and represent the most influential and dedicated within, our sport, Dr. Clayton, Mr. Rockwell, and Verdades are perfect candidates for induction.

As the inaugural McPhail Chair in Equine Sports Medicine, the world-renowned equine-biomechanics expert and researcher Hilary Clayton, BVMS, PhD, Diplomate ACVSMR, MRCVS, has quite literally rewritten the rules of dressage. As a result of her research on gaits and movement, US Equestrian dressage rules had to be revised to reflect the truth of ho w horses piaffe and pirouette, to name two prominent examples. Dr. Clayton's groundbreaking dressage-focused research has influenced the sport from the ground up, from our choices of arena footing and the way we care for growing young horses to bitting, training, conditioning, and veterinary care.  Dr. Clayton is also currently president of Sport Horse Science, LC, which is dedicated to translating research data into practical advice for riders, trainers, and veterinarians through lectures, articles, and private consultations. Additionally, Dr. Clayton is USDF gold, silver, and bronze medalist, a longtime USDF Connection contributing editor, and served as a past member of the US Equestrian Federation's Dressage Committee.

Gary Rockwell is a USEF ‘S' Judge with Young Horse and Freestyle designations, as well as an FEI 5* Judge, having served as such for numerous Olympics and World Cup Finals. As a former member of the US Equestrian Team, Gary and his Danish Warmblood mare, Suna, rode at CHIO Rotterdam in 1993 to earn a team silver medal, and a team bronze medal at the 1994 World Championships at the Hague, Holland. Eventually Gary became a 5* FEI Dressage judge in 2008. Gary currently serves as a member of USDF's L Program Faculty, as well as an Honorary Instructor for the USDF Instructor/Trainer Program. Gary served as a member of the USDF Judges Committee from 2010-2012, and then as chair since 2013.

The great Verdades (Florett AS x Liwilardo/Goya), “Diddy”, burst onto the international stage in 2014 and subsequently led the US to multiple medal podiums including Olympic Games, FEI World Eques­trian Games (WEG), and FEI World Cup Dressage Finals. Along with his owner and rider, Laura Graves, the 2002 KWPN gelding amassed local, regional, and national wins before becoming a seemingly overnight success. Graves and Verdades were still practically unknown when they placed second at the 2014 US WEG dressage qualifying competition and proceeded to stun the world by finishing fifth individually, the highest-scoring US pair at those Games. Other major achievements include team and individual Grand Prix Special silver medals at the 2018 FEI WEG, team bronze at the 2016 Rio Olympic Games, silver medals at the 2017, 2018, and 2019 FEI World Cup Dressage Finals, and team gold and individual silver at the 2015 Pan American Games. On January 8, 2020, Graves announced Verdades' retirement via social media.