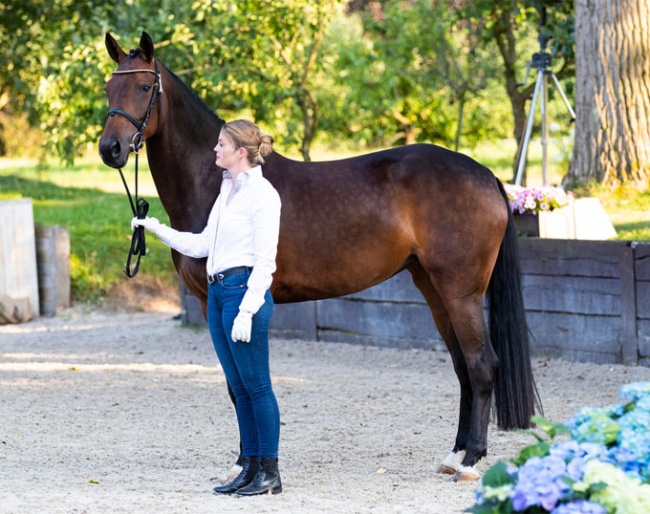 The dressage arena in the gardens at Hof Kasselmann was festively decorated, the red carpet laid out, the auction desk ready for the 2020 Hof Kasselmann Hybrid Auction on 8 August 2020.

The Kasselmann team had once again invited their international clientele to an auction, but this mild summer evening on 8 August was marked by a special premiere: For the first time, more experienced dressage horses, some trained up to Intermediare II level, were part of the collection, which was offered via a new hybrid auction format.

Bids for the new dream horse or sports partner could be submitted online, on site or by phone, and all three avenues were used intensively and enthusiastically. Bidders registered online right up until the start of the auction and the “Corona-compliant” spectator area at the auction ring was well filled.

Auctioneer Hendrik Schulze Rückamp was in fine form and it didn't take long before the top price was reached. The 4-year-old Westfalian mare, Fine Deern, by the Westphalian reserve champion Formel Eins (Franziskus x Cornet Fever), entered the auction ring as the second horse. Equipped with talent and potential to burn, she had already received a lot of attention prior to the auction. Tagged as a future championship contender, the youngster quickly became the target of a bidding duel between Taiwan and Denmark. The hammer fell at 400,000 euro in favour of long-term clients from Taiwan.

The second most expensive horse in the auction was the 11-year-old San Amour gelding, San Silvio. He sold for 255,000 euro.

Parties from the USA, Canada and France showed keen interest in catalogue number 2, the 10-year-old Fürst Romancier son, Formidable, who had already been successful at Prix St Georges level, but ultimately on site buyers won the bid. He sold for 120,000 euro.

Doblesso (by Don Nobless x Pik Pavarotti) sold for 110,000 euro to client bidding live at the venue. The same price was paid for Varahno (by Vitalis x Furst Romancier). A client at the venue was bidding against a U.S.A customer and ultimately won the bidding process.

The quality of the collection justified the effort and the downright exuberant mood of the bidders. The selection of 13 dressage talents easily convinced the international audience and achieved the sensational overall revenue of EUR1.6 million. The ratio of buyers from the floor and online bids was almost 50-50.

“The demand was great and the new hybrid format has instantly proven itself. We are on the right track with a concept for the future.” said organizer Francois Kasselmann. "We are very satisfied. Once again we could see that well educated and quality horses are always highly sought after."