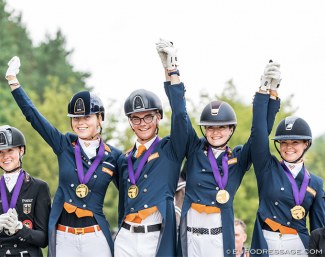 As last rider to go for Holland and in the class, Marten Luiten was in the favourable yet also stressful position to score at least 75.9% to overtake the Germans.  Luiten kept his cool and pulled it off. He assisted in putting the Dutch team total to 222.940 points for gold, edging out Germany's team of just three for silver with 222.030 points. The Danish squad slotted in third with  215.794 points and got bronze with team Belgium on their heels.

Daphne van Peperstraten led the Dutch charge for gold with her long-time partner Cupido, a 13-year old Dutch warmblood gelding by Johnson x Duco. The 2018 European Junior Riders Champion missed out on podium places at the 2019 European Young Riders Championships, but gave plenty of promise for the future there, that 2020 would be her year.

She rode a very polished team test with little to remark. The first medium trot was maybe a bit conservative and there was some tilting in the right half pass, in which the horse lacked elasticity in the body, but overall the trot tour was very consistent and flowing. From a side view, Daphne sits tall and proud, but from a front view you can see that she often leans to the right side and is not entirely centered in the saddle; this also showed in the left shoulder-in, in which she was almost in a posting trot (and this also showed in the left canter half pass). Nonetheless, the pair showed beautiful riding with a nice clear collected walk, good turns on the haunches, a very good extended walk with a clear 4 beat rhythm and two hooves overstep. Throughout the ride, the horse was quiet in the contact and head position and had an easy way of going. The canter work was consistent: lovely, small half pirouettes, clear tempi changes which were proof of Daphne’s very efficient and delicate riding. The end halt was a bit stretched out and tight behind. Overall it was a very clean ride that earned her the high score of the day: 75.882%

The 18-year old Marten Luiten, who won double silver at the 2019 European Junior Riders Championships, made a seamless transition to Young Riders level and showcased his skill in the team test. His 10-year old KWPN mare Fynona (by Ampere x Gribaldi) masters the small tour movements well. The trot work was fluent, aside from a small spook on the left volte, and there was good flow also in the traversal movements and only in the second extensions, she became slightly irregular in the rhythm. The collected walk needed to be a fraction more collected. Luiten, just like several other riders seemed to avoid the difficulty of this movement by riding the walk more as a working or medium walk, but without the stretched neck. This of course makes its easier for the rhythm to stay clear.  The extended walk had just one to two hooves overtrack, but there was good energy and relaxation. The canter work was smooth with very nice, small half pirouette, lovely expressive four tempi changes and clear threes. In the extended canter the mare stayed a bit tight in the frame, which was probably the biggest general comment on the ride: more length in the neck overall would make the total image even more appealing. They finished with an end halt that was stretch out behind, instead of the hindlegs tucked under the body. Still Luiten’s tunnel focus, fault free ride guaranteed him a whopping score of 75.823% and a clear team victory for Holland.

Holland's third score was produced by the their best scorer in the first group of the team test on Monday, Dutch team new comer Quinty Vossers on Hummer. They earned 71.235% for 9th place, while Holland's scratch score ended up being a dramatic elimination of Thalia Rockx, whose Golden Dancer La Fazenda (by Bretton Woods) ended up biting his lip and drawing blood in the test.

The lead-up to Budapest for the German team was nothing short but highly dramatic. Right before departure to Hungary, no less than three horses went unsound and one horse tested positive to a medication test. This all resulted in Germany fielding a "diet team" of just three riders. One would need to interview a hagiograph to find out when this last happened in German dressage history.

Germany's anchor rider Lia Welschof popped up in Pilisjaszfalu not with her number one ride Linus K (by Locksley II) but her reserve horse First Class, who was not officially announced as a reserve ride. This pair kept their cool in all the team selection fuss and received the highest score for Germany from the judges. With 75.794% they landed a third place. First Class (by Furst Romancier x Wind Dancer) was first wide behind and then not entirely immobile in the halt at entry.  The trot on the left lead was expressive but a bit hurried. The young small tour horse was crossing the jaws in the left half pass. He covers good ground in the trot extensions, but does not come across as very balanced yet. The collected walk was ridden too freely and not ideal in the clarity of rhythm. The turns on the haunches were small. First Class showed good relaxation and lengthening of the frame in the extended walk although there isn’t the biggest overstep. The left half pirouette in canter was small and well collected but a bit hesitant in the exit. The flying changes at C were outstanding. One change in the line of fours was a double beat behind before the change. The changes are big but in the threes the ones to the left were crooked. First Class appeared still young at small tour level and Welschof did a good job to get the best out of him at this moment.

As Welschof left the arena as last Germany rider, the judges were all over the place with their scores. The low score was 73.382% from the Estonian judge and an eye brow raising 79.706% from the Dutch judge at C.

Germany's second best score came from team new comer Luca Sophia Collin with the 10-year old Hanoverian gelding Descolari (by Desperados x Weltmeyer). They slotted in right behind Welschof in fourth place. Collin's lack of mileage in the international arena showed as she still was busy with her horse, fidgeting in front while riding up the centreline. Descolari is a bouncy trotter but he is consistently held behind the poll. The total image would be so much prettier if he opened more in the throat latch. Still he was nicely rhythmical and forward thinking in the trot. There was little collection shown in the collected walk and the horse gets a bit prancey and rigid in the back. The right turn on the haunches was too big, the left one better. The extended walk was outstanding in its pure 4-beat rhythm. The strike off to canter went via trot. The flying change after the canter half pass a bit untidy. There was a double beat in the preparation for the left half canter pirouette, the right one was much better. The four tempi changes were clear but not straight, especially in the neck, in the threes the last one didn’t come through properly. The extended canter was energetic but the preparation for the flying change as well as the final halt a bit unpolished. There were quite a few niggles in Collin’s ride, but it had little effect on her overall score. The judges rewarded it with 73.412%.

Germany's third score was 72.824% achieved by the overnight leader of the team test after group 1, Henriette Schmidt on Rocky's Sunshine (by Rock Forever x Fittipaldi).

The Danish team finished in third position and got the bronze.

The Danish campaign was led by seasoned competitor Sara Aagaard Hyrm on the 14-year old Danish warmblood Skovborgs Romadinov (by Romanov). The halt at entry was wide behind but a nice, quiet trot lengthening and sweeping half passes followed. The second trot extension should gain more ground cover instead of flash in front. Romadinov tilted his head a bit to the right in the collected walk, which was ridden too freely with not enough collection. The extended walk was nice. The canter tour was very smooth with good pirouettes and very easy looking tempi changes. In the final extended canter he got a bit straight legged and lost the roundness in the nice 3-beat rhythm. nevertheless it was a very solid, confident round that earned them 72.794% and a 6th place.

Karoline Rohmann and Jakas Don Louvre rode Denmark's best score on Monday and ended up 7th with 72.559%, while Laura Jarlkvist Rasmussen and Aatoftens Dornier produced 70.441% to be added to the team total. Maria Mejlgaard Jensen and Antango (by Ampere x Jazz), which they bought from the French Haras du Feuillard had too many niggles and were the scratch score (70.382%).

Belgians Back in Fourth Place

In 2019 the Belgian team finished in a very respectable fourth place and this year they recaptured that fourth place with 211.530 points. They were still four percentage points behind Denmark but it makes one wonder if the wrong flag was on their saddle pad?

Three Belgian riders produced excellent tests that could easily have been more generously scored. The best result came from Suraya Hendrikx on the 9-year old Westfalian gelding Dear Friend (by Danone x Dollmann), who scored 70.853% for 10th place.  The pair was very consistent in the trot; it was regular and engaged with a very consistent bridle contact, no fidgeting in front. The contact could have been a bit lighter, but it was steady and quiet. The collected walk was a bit forward, but there was nice relaxation in the extended walk with a clear 4 beat rhythm. Dear Friend showed good sit in the pirouette, but the exit in the left one could have been smoother, the right one was a bit big. The canter tour looked very safe, with clean changes and Hendrikx finished her test with a good, square end halt.

A ride that easily could have received more points was Amber van den Steen's on the 10-year old KWPN gelding Fame (by Ampere x Sultano). The duo showed a very strong, confident trot tour with an impeccable rhythm and good extensions. Agree, the short necked horse should have the nose come out a bit more, but he was very steady in the bridle, although Van den Steen's piano hands indicated the firm connection with the bit. Still the trot work was very smooth. In the collected walk, Fame did not have the best rhythm, but it was carefully ridden. In the extended walk there could be more marching and ground cover and there was a bit of a balance issue in the canter half pass right, but the pirouettes were carefully prepared and they showed big uphill changes. The four tempi changes were outstanding - straight, confident - and then a silly counting mistake followed in the threes. It was such a pity because her score should easily have been around 72%. Instead the judges were reserved with their points and Amber and Fame ended up at 70.265% to place 15th.