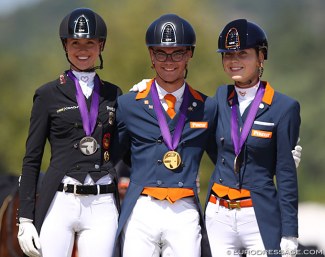 Dutch Marten Luiten rose to the top of the board and claimed the individual gold medal in the 2020 European Young Riders Championships held in Pilisjaszfalu, Hungary on 20 August 2020.

The individual Young Riders competition was contested via the Individual Test which was ridden by two groups; the first going on Wednesday 19 August, the second riding today 20 August 2020. While a set of riders in group one was plagued by a torrential downpour of rain, the second group rode in optimal sunny summer conditions.

Dutch Marten Luiten was the double individual silver medal winning rider at the 2019 European Junior Riders Championships and after impressing Dutch selectors in the team trials in The Netherlands, the young Luiten arrived in Budapest as Holland's secret weapon and hot candidate for the medals.

Aboard his 10-year old Dutch warmblood mare Fynona (by Ampere x Gribaldi) he showed that accuracy counts. The long legged, lean mare is a bit straight legged and lacks roundness in her rhythm, especially in the canter, but Luiten brings the best out of her nonetheless. He began with a square halt, elegant shoulder ins, and good extended trots although they stay quite horizontal and could have more spring off the ground. The extended walk had two hooves overtrack and good relaxation, but the mare did not really stretch the nose out. And that is probably the biggest issue in this horse. She is consistently tight in the neck and the nose behind the vertical. This slightly cramped frame leads to less elasticity in the canter work, but Fynona is incredibly obedient and willing to work and produced excellent canter work with straight tempi changes and well collected small pirouettes. The canter half pass left was a bit on the forehand and the final halt was wide behind.

Luiten rode fairly at the end of the day and pulled it off convincing the judges of his proficiency as a young rider. The panel was swept away and scored him beween 76 and 78%, placing him first unanimously. He finished on the gold medal step of the podium with 77.559%.

Harmony and Ease for Silver

German Lia Welschoff and her 9-year old DSP bred gelding First Class (by Furst Romancier x Wind Dancer) paint a totally different picture from Luiten. While the Dutchman brings accuracy, collection and control to the fore, the serial medal winning Welschof makes harmony, lightness and grace count. She scored 75.853% for the second place and the silver medal, but the 2% score gap was unjustified as Welschof probably answered more to the ideals and principals of dressage, but there were a few minor blips in the polish of her test, while Luiten had a tidier ride.

The black First Class was properly gymnasticized with swing and elasticity through the body. The pair showed very nice shoulder ins. Their trot one was marked by fluency, rhythm and ease. The rein back could have been smoother and in the extended trots First Class runs a bit, but does move with an uphill tendency. The extended walk had two hooves overstep and showed a good rhythm, but in the collected walk there was a clear loss of clarity and he almost became lateral. The four tempi changes were big, but the horse still swings a bit to the right. The extended canter was good, but the young small tour horse lost a bit of quality and balance in the counter canter. Nevertheless, the softness and elegance of the ride were a pleasure to watch.

The 2017 European Junior Riders Champion and last year's fourth placed young rider, Dutch Daphne van Peperstraten, was probably the biggest name coming to Hungary and the hottest favourite for individual gold.  After winning the team championship test on Tuesday with a very convincing ride, Van Peperstraten unfortunately could not reproduce that level today. Her star halo and powerful horse lifted her on the bronze medal step of the podium though.

Van Peperstraten and her wonderful 13-year old Dutch warmblood gelding Cupido are always a pleasure to watch. The softness and lightness are their forté, but today there were quite a few issues, first and foremost Daphne's seat which looks good from a side view, but a frontal view reveals that she is standing in the stirrups instead of sitting on her bum, leaning to a side instead of centered in the saddle, and often crossing her hands over the withers to bend her horse. Unfortunately, this actually blocks him, made obvious in the trot and canter half passes to the left which are less elastic. Also today Cupido did not look as fresh and regular behind in the trot work, causing him to curl a bit behind the always very light and friendly contact. Still, there was plenty of strong work shown by the experienced pair. The extended walk was fabulous with very good overtrack and relaxation. The four tempi changes are huge and the pirouettes good. At the end of the test, Cupido changed lead at the end of the extended canter diagonal, and Daphne struggled to get this fixed, losing the entire corner with miscommunication.

This major booboo could have pushed her from the podium, but not so today. She still got plenty of marks from the judges and scored 74.265% for bronze. Her individual marks ranged from 72.647% to a big 75.588%. She ranked between second and sixth place.

Germany's Henriette Schmidt and her 13-year old Westfalian stallion Rocky's Sunshine (by Rock Foreer x Fittipaldi) looked like they were quarreling in their team championship test on Monday. The rider was fidgety in the bridle contact and had a backwards working hand. But like all lovers' quarrels, peace was made in the individual test between the two and they painted an entirely different picture as a combination.

Schmidt upped the ante and had a much better ride. Her hands were quite and more subtle in the half halts, which assisted in the fluent, easy going trot tour. Only in the rein-back Rocky's Sunshine was not picking up the phone. In the extended walk the horse needed to stretch more forward with the nose, but the relaxation was good. Also the collected walk was very clear in the rhythm. The tempi changes were straight but a bit flat, also in the extended canter, the horse could have shown more elasticity in the back and roundness. One half halt before the pirouette should have been more subtle.

Overall, Schmidt had a correct ride and got 73.500%. The individual judges' marks did not differ more than two percent, although in ranking Schmidt ranked between third and eighth place.

Germany's team new comer Luca Sophia Collin presented her fantastic horse, the 10-year old Hanoverian gelding Descolari (by Desperados x Weltmeyer), in the individual test but it was the flash of its movements that bewitched the panel of judges.

The long legged black gelding has so much bounce, suppleness and scope, both in trot and canter. Collin held her hands quietly on the withers and the contact was soft, but the horse was not really taking the bit and closed and collected in the frame. The trot was bouncy and elastic with big half passes, but Descolari constantly dropped behind the vertical and had an unsteady head. The extended trots were supple and ground covering, the extended walk was excellent, but the collected walk was just slow instead of collected. Two big mistakes in the four tempi changes and no proper collection before the left half pirouette were some of the biggest issues in the ride. The right pirouette was nice. The lack of collection also showed in the extended canter in which the horse fell apart. The young stallion as well as a green rider still have plenty of time to mature and develop. There is much more in the tank for the future.

Dutch Quinty Vossers had a lovely ride on the 8-year old home trained KWPN gelding Hummer (by Charmeur), but the eye catching dark bay is a bit of a leg mover and needs to come more off the hand and in self carriage. Definitely one to watch for the future.

One ride certainly worth mentioning was that of the 12th placed Belgian rider Amber van den Steen on the 10-year old KWPN bred Fame (by Ampere x Sultano). This duo produced such a clean, correct, meticulous ride with a flawless rhythm in the trot, a very consistent contact with the bridle and the head of the horse fixed at the vertical. The rein back showed good diagonality, the extended trots were cadenced and the canter work was outstanding, with superb pirouettes and super straight tempi changes. The fairly short necked Fame does appear a bit closed in the frame, but definitely not more than gold medalist Fynona. Fame's weak point is maybe the extended walk in which the rhythm is not ideal and he should march more, but the quality of the trot and canter work was so superior that it would have made up plenty of points for the walk.

When the mind bogglingly low 70.529% flashed on the board,  jaws dropped. A rider coming from a nation that is not Germany, Holland  or Denmark needs to ride twice as hard to earn points. A 73% + score would have been the only logical mark for this fantastic test! Maybe the Belgian flag needs to swap its red and yellow colour - accidentally - to see if that would bring justice to the judging.