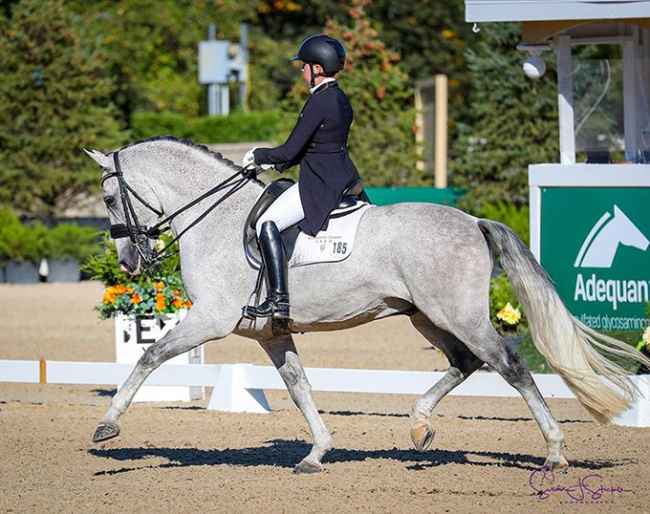 Excitement continued to grow as the second day of competition delivered excellent riding at the 2020 U.S. Dressage Festival of Champions. Competitors in the Under 25  Championship and Intermediaire I Championship each had their second turn in the arena, and the Young Rider National Championship riders made their show debut at Lamplight Equestrian Center.

Gluch Wins Round 2 of Under 25 National Championship

Competitors in the Adequan®/USEF Young Adult ‘Brentina Cup’ National Championship kicked off the second day of competition at the U.S. Dressage Festival of Champions bright and early on Wednesday. Seven horse-and-rider pairs completed their FEI Grand Prix 16-25 Test, which is the second of three rides each pair will complete in their quest for the national championship.

Kerrigan Gluch (Wellington, Fla.) and Hampton Green Farm’s 13-year-old Andalusian stallion, Vaquero HGF, turned in a clean and polished ride to finish first in the class with a 68.744%.

“Today was one of the best rides I’ve ever had in the arena,” said Gluch. “I really focused on honesty and harmony throughout the whole test and just being as relaxed as I possibly could, and I think this test showed that I accomplished that. Honestly, I’m over the moon happy.”

Gluch and Vaquero HGF are currently second in the Brentina Cup overall standings, just behind Sara Hassler (Chesapeake City, Md.) and Harmony’s Boitano, a 14-year-old KWPN gelding owned by Leslie Malone. Hassler and Harmony’s Boitano finished second in today’s test with a 67.487%. Rebecca Roman (Birmingham, Ala.) and Nancy Roman’s 19-year-old KWPN gelding Ultimo earned a score of 64.154%, putting them in third place for the class and the division.

Gluch: “Very consistent to yesterday. I fixed a little bit of the bobbles that I had yesterday and changed those a little bit so I had a cleaner test than yesterday, so that was the main goal, just to fix those little things and have a clean test, happy ride. Him relaxed, myself relaxed, and that’s what I did.”

How long have you been riding Vaquero?

Gluch: “Since 2015, so a while. I did the Young Rider European Tour with him and then took time to bring him to U25.”

What are you goals going forward with him?

Gluch: “I would like to make the U25 European tour next year. It’s my last year at U25 next season, so that’s my goal, to make it on another team with this horse. So that’s where we’re focused on after this competition.”

Tell us about your Freestyle.

Gluch: “It’s a brand new freestyle to me. I just finished it up over the summer. It’s done by Marlene Whitaker. It’s very fun music. I really love the choreography. I think it really highlights him and how he can perform well and what things highlight him as a horse. I’m very excited.”

Ots Scores in Intermediaire I Championship

Twelve combinations rode the FEI Intermediate I Test, the second of three tests in the USEF Intermediaire I Dressage National Championship, on Wednesday, moving one step closer to determining the national champion. Endel Ots (Wellington, Fla.) and Sonnenberg’s Everdance delivered another stellar test to score 75.441%. Sonnenberg Farm LLC’s 11-year-old KWPN mare delivered a consistent performance for Ots to win the class and lead the overall championship.

“I was very happy with her again; she tried really hard,” said Ots. “I was very excited to get out and get showing again, so I got on a little too early in the warm-up, so it was just a little too much warm-up on her. It was not as powerful as I would have liked to be able ride it, but you really just pilot her around and point and shoot with her. She tries really hard for me, and I am really happy with her.”

David Blake (Cardiff by the Sea, Calif.) and Heide Spirit, his 10-year-old Oldenburg mare, were second with a score of 72.559%. Callie Jones (Henderson, Ky.) and Don Philippo, her 12-year-old Hanoverian gelding, were third with a score of 69.823%.

From the Mixed Zone

Does Sonnenberg’s Everdance seem to know it is a national championship?

Ots: “She just thinks it’s another show. She pumps up when she is in there. I have taken her to a bunch of shows now and she always gets a little bit more energy but is always very manageable. She is a very steady Eddie horse; I mean really, really steady.”

What has it been like to develop your partnership with this horse?

Ots: “It has been great. Dan and Gina Ruediger of Sonnenberg Farms contacted me. I am not the best with emails and I will have a couple hundred in there. I just spent an evening going through my emails and I got a nice long email with a bunch of beautiful horses on there. I responded and then we started communication. I was teaching a clinic in Colorado, so I said, ‘Hey, I can pop over there right after Colorado and take a look at stuff.’ They have a beautiful facility and just stunning horses. The best young horses I have seen bred in the U.S. and rival the ones in Europe. All really great minds. Last year, Sonnenberg’s Kain with Michele [Bondy] won the four-year-olds. They are just really great people.

“We talked about bringing the mare down [to Wellington]. I told them my goal was the same thing—qualify for the I-I championship and the goal is to win. I wanted to get to know her at home and get her used to a little bit my riding style and a partnership with her. We kept pushing off on doing some national shows until I felt like we both really understood each other. We did national shows, then CDIs, and it has been great.”

Ots: “I would say it’s Edward Gal-esque. It is a new freestyle. She is a big, powerful horse, so we wanted something with some feeling. I liked Lucky’s [Lucky Strike, Ots’s 2019 Intermediaire horse] freestyle last year. The music was nice, but it didn’t give you goosebumps. This one I think will definitely do that. I’m really excited about it.”

Fourteen young riders made their 2020 Festival of Champions debut on Wednesday in the FEI Young Rider Team Test. Katherine Mathews (San Marcos, Calif.) rode Peridot Equestrian LLC’s 16-year-old Hanoverian, Soliëre, to the top of the class. Mathews and the striking black gelding performed a clean and powerful test, earning a 72.157% from the judges.

“He was a little bit slow and a little bit lazy in the warmup,” says Mathews. “I didn’t quite know what was going to happen in the ring, so the ride itself, it felt a little different than it looked. He was having me manage it a little bit and, honestly, that makes it so much better. I kind of had to work for it a little bit. Learning that I got the score that I did felt miles better knowing what I worked for in the ring to get there. It was a difficult one but it was really, really good.”

Mathews: “It depends, he can be very good. And then other times he can be kind of heavy or he can be kind of hot. It just kind of depends. And today he was a little bit heavy but he was certainly aware of the environment around him. He’s still pretty good most of the time, though.”

What have you been working on this year?

Tell me more about your partnership. Does Guenter Seidel train you?

What did you focus on leading up to this competition?

Mathews: “Probably collection and engagement work because that’s always been a bit more difficult. He’s a big horse, big-bodied, at least, and he’s very powerful. Getting a little bit more of that light step in there is something we’ve been working on for a while.”

What are you looking to do long-term? Next year?

Mathews: “Next year I’m going to try to go to the Young Rider European tour. Assuming that’s happening next year, it didn’t happen this year for obvious reasons. That’s my goal for next year. Long-term, after that, I’m hoping to maybe go up the levels but for now I’m very happy with Young Riders.”

Is there anything that you’re looking to improve upon for your next test?

Mathews: “It’s difficult because it changes with every test. I think with Soli, it’s probably working on the suppleness and the lightness in the hand. Like I said, he’s quite powerful, so getting that kind of responsiveness from him is something that I think would really help us get higher scores in the future.”

On Wednesday evening, competitors in the Developing Horse, Young Horse, Junior, Children's, and Pony Rider divisions presented their horses to the veterinary panel. All horses and ponies passed the initial inspection.

by Kathleen Landwehr and Leslie Potter