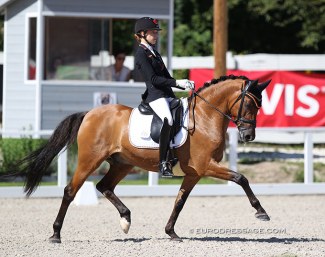 Germany's Lucie-Anouk Baumgürtel is the overnight leader in the individual test with a new world record score at the 2020 European Pony Championships in Pilisjaszfalu, Hungary, on Friday 28 August 2020.

For the Individual test the class is split up into two groups, the first one going today. With three of Germany's team gold medal winning riders drafted for Friday, the competition took a warp speed nine start.

After a windy team championship conclusion, the weather was milder and quiet today with riding conditions back to normal.

In her last year on ponies, the 16-year old Lucie-Anouk Baumgürtel is certainly making it count. The 2020 Europeans in Budapest are already her fourth in her career and twice did she win the individual European Champion's title, in 2016 and 2017 on Massimiliano. After a one-year stint at junior level on horses, Lucie-Anouk decided for ponies one more time with a new ride in the barn, the 9-year old Nasdaq (by Nemax x FS Don't Worry).

Baumgürtel and her bay Nasdaq were the high scorers in the team championship test and after being put in the number one spot as the ones to beat, the judges were more than eager to reallocate her a top score on Friday

Baumgurtel rode a strong test with much brio and forward energy. Nasdaq has a lot of knee action and upward spring, but could stretch more forward through the body and over the back. The halt at entry was not immobile and at the start of the ride the trot work was a bit hasty with too much variation in stride length The extensions were very nice though. The shoulder in left was not ridden enough with the pony barely moving on three tracks and overall there was a lot of ankle motion involved from the rider to keep her pony forwards. The walk part was well regulated, but there were minor issues in two simple changes (one late on the aids, another loss of clarity in walk) and one extended canter was flashy but downhill. The end extended trot was powerful and impressive as well as the end halt, even though the moment of collection before the halt was barely shown.

Baumgürtel's ride was an energetic and confident one, highlighting the quality of her pony, but her team test performance on Thursday seemed less work. The judges  (Hillier, De Wolff, Nivelle, Nysten, Vint-Warmington) thought today was better and conjured a massive 82.351% out of the bag, which is in fact a new world record score. The previous pony individual test world record score was ridden by Phoebe Peters on SL Lucci at the 2015 European Pony Championships in Malmo (81.390%). The judges' individual marks went from 80.946 (Nysten) to 85.270 (De Wolff).

For German team new comer Antonia Roth the 2020 Europeans are a brand new experience and every day is a new adventure. Roth has a smile on her face, from ear to ear, expressing pure joy and the thrill if being there, while other Euro routiniers look placid and almost emotionless.

Roth and Daily Pleasure had a square halt, but the shoulder in right was a bit hurried. The half passes were fluent, but there was some unevenness in two extended trots. The collected walk was good, but the pony lost some impulsion in the right turn on the haunches. The extended walk had a good rhythm, but the overstep could be even more. Throughout the ride, Roth kept a steady contact with the bit that was pleasant and elastic. In canter her liver chestnut stallion had a tendency to be a bit crooked to the left with his hindquarters, but all the canter work was executed in a very soft-footed way.

Germany's youngest rider on the team, 13-year old Rose Oatley, has the highest quality pony of all riders at the 2020 Euros. A daughter of multiple Australian Olympian Kristy Oatley, young Rose dreams big and individual gold is certainly within reach, if she stays fault-free. However, that is not an easy task, for any rider.

Oatley and her 10-year old Rhinelander gelding Daddy Moon (by Daddy Cool x Capri Moon) started with an energetic entry and square halt, followed by a safe shoulder in right. In the half pass right the hindquarters trailed a bit and to the left the rhythm was not 100% pure, but the trot extensions were phenomenal with mega cadence. The right turn on the haunches was slightly big and the extended walk was high class with good relaxation and overtrack. Throughout the test, Rose had quiet hands, even though Daddy Moon could foam and chew a bit more. The simple changes were superb, but then at the end of the test there was a final issue in them and the pony dropped out of canter at the end of the centerline. Two big mistakes dashed the golden dream.

Aiming for the freestyle

Holland's best rider in the team test, Lara van Nek and the 10-year old Westfalian Baumann's Despino (by Don't Worry x Rosedale Tiberius) are provisionally ranking fourth. The pair excelled in the trot extensions, showed a super extended walk and had a very good end halt, but in the counter canter the pony lost the self carriage and overall the contact needs to be a lighter, less pulling one. They scored with 76.000%.

Dutch team mate Jill Bogers and her 8-year old NRPS gelding First Hummer (by FS Mr Mobility x Jarno) showed a test with good energy in trot, a well regulated walk and an overall quiet contact. The simple changes were a bit of an issue today, one being out of trot and in another the walk needed to be developed better. They scored 74.216% to rank fifth for now.

Belgian Britt van de Weyer proved her mettel with yet another super concentrated, fluent ride on the 11-year old Belgian warmblood bred N-Constantino van de Bolkerhoeve (by Constantin x Fidji de Fleury). The pair rode a very clean and tidy test with lovely extended walk, trot, and canter parts and fluent traversal movements. The rider does lift the pony's head a bit with her hands instead of keeping them steady and light on the withers. They scored a well earned 71.568% for a 6th place.

Swiss Layla Schmid and her 14-year old Belgian bred buckskin Ashen Dew Drop (by Dornik B x Pavarotti) stood out with really lovely riding. The French based Swiss rider has an independent seat, very quiet, soft hands that have a kind and elastic contact with the bit. While Ashen is not the most ground covering and bouncy mover, the pony showed pleasure in her performance and was very willing. They scored 71.541% for 7th place.

Austria's Felicita Simoncic and her 16-year old Rhinelander stallion Chantre (by FS Champion de Luxe x Desteny) are on a roll in Budapest. After an excellent team test, the pair continued to prove form in the individual. The frame is consistent and light, the trot extensions were expansive, in the half pass right the pony got a bit slow though. An unscripted flying change on the serpentine reduced the score to a 70.973%.

The individual test concludes on Saturday morning with group 2. All of Denmark's riders are still to go and Germany has one more pair, Shona Benner and Der Kleine Sunnyboy to try for individual glory. The top 18 riders move on to the freestyle, but only three per nation are allowed.